This is an entended version of our talk at eBPF Summit 2022: Large scale cloud native networking and security with Cilium/eBPF: 4 years production experiences from Trip.com. This version covers more contents and details that’s missing from the talk (for time limitation).

In Trip.com, we rolled out our first Cilium node (bare metal) into production in 2019. Since then, almost all our Kubernetes clusters - both on-premises baremetal and self-managed clusters in public clouds - have switched to Cilium.

From our 4 years of experiences, the audience will learn cloud native networking and security with Cilium including:

The Trip.com cloud team is responsible for our infrastructure over the globe, as shown below:

The cloud scope is the box shown in the picture.

More specific information about our infra:

2.1 Timeline of rolling out

This is a simple timeline of our rolling out process:

In 2021, with most online businesses already in Cilium, we started a security project based on Cilium network policy [8].

Some of our customizations based on the above topology: 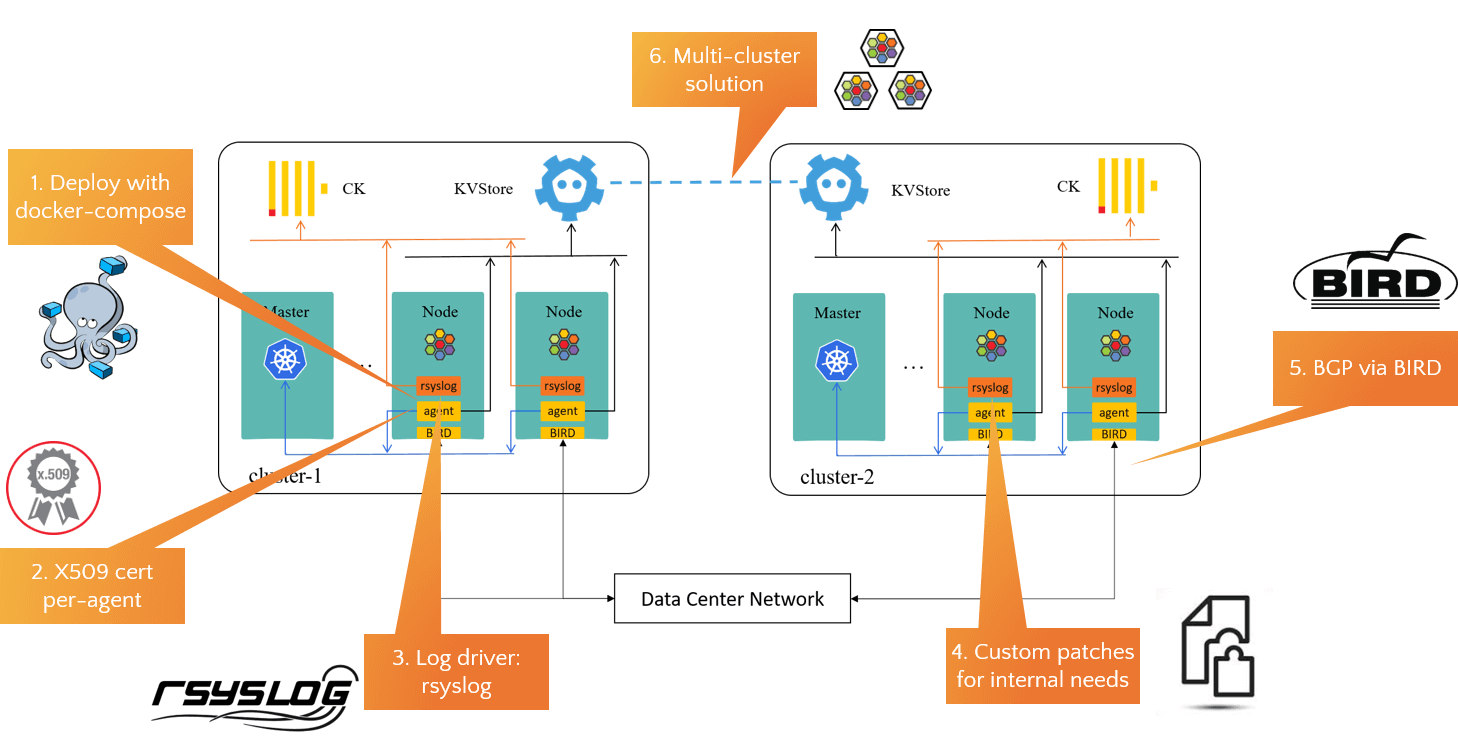 Now the optimization and tuning parts.

As mentioned just now, the first thing we’ve done is decoupling Cilium deploying/installation from Kubernetes: no daemonset, no configmap. All the configurations needed by the agent are on the node.

This makes agents suffer less from Kubernetes outages, but more importantly, each agent is now completely independent in terms of configuration and upgrade.

The second consideration is to avoid retry storms and burst starting, as requests will surge by two orders of magnitude or even higher when outage occurs, which could easily crash or stuck central components like Kubernetes and kvstore.

We use an internally developed restart backoff (jitter+backoff) mechanism to avoid such cases. the jitter window is calculated according to cluster scale. Such as,

Besides, we’ve assigned each agent a distinct certificate (each agent has a dedicated username but belongs to a common user group), which enables Kubernetes to perform rate limiting on Cilium agents with APF (API Priority and Fairness). No Cilium code changes to achieve this, too. 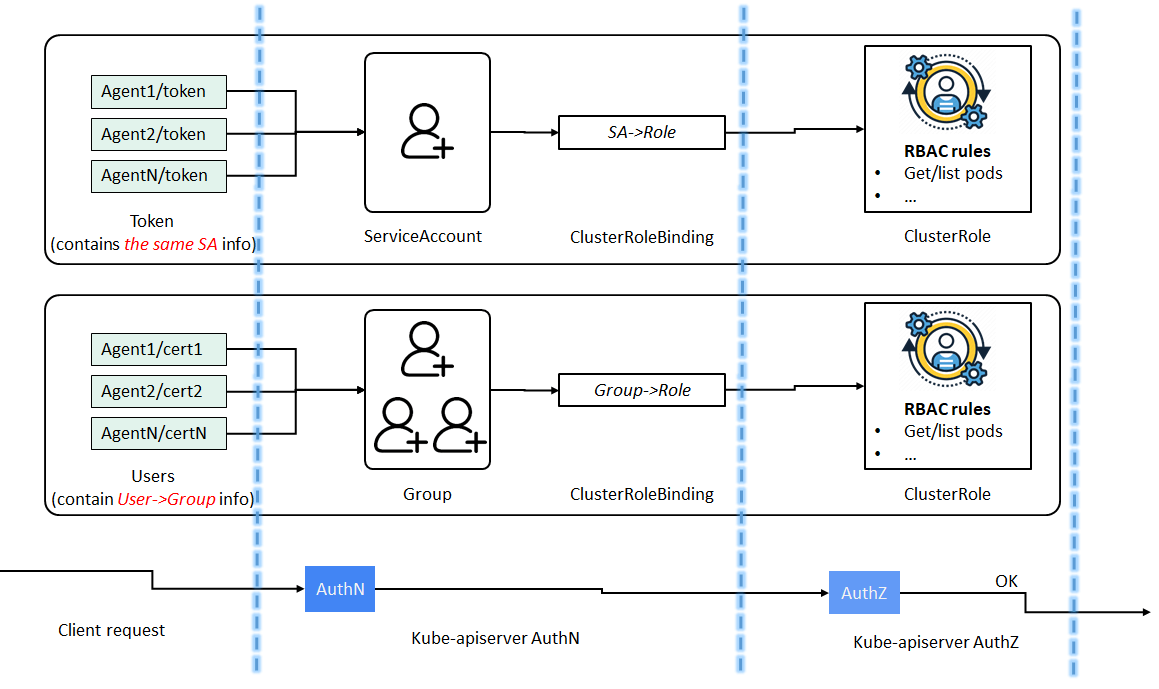 Refer to our previous blogs if you’d like to learn more about Kubernetes AuthN/AuthZ models [2,3].

Trip.com provides online booking services worldwide with 7x24h, so at any time of any day, business service down would lead to instantaneous losses to the company. So, we can’t risk letting foundational services like networking to restart itself by the simple “fast failure” rule, but favor necessary human interventions and decisions.

When failure arises, we’d like services such as Cilium to be more patient, just wait there and keep the current business uninterrupted, letting system developers and maintainers decide what to do; fast failure and automatic retries make things worse more than often in such cases.

Some specific options (with exemplanary configurations) to tune this behavior:

Refer to the Cilium documentation or source code to figure out what each option exactly means, and customize them according to your needs.

Depending on your cluster scale, certain stuffs needs to be planned in advance. For example, identity relevant labels (--labels) directly determine the maximum pods in your cluster: a group of labels map to one identity in Cilium, so in it’s design, all pods with the same labels share the same identity. But, if your --labels=<labels> is too fine grained (which is unfortunately the default case), it may result in each pod has a distinct identity in the worse case, then your cluster scale is upper limited to 64K pods, as identity is represented with a 16bit integer. Refer to [8] for more information.

Besides, there are parameters that needs to be decided or tuned according to your workload throughput, such as identity allocation mode, connection tracking table.

Cilium includes many high performans options such as sockops and BPF host routing, and of course, all those features needs specific kernel versions support.

Besides, disable some debug level options are also necessary:

The last aspect we’d like to talk about is observability.

Apart from the metrics data from Cilium agent/operator, we also collected all agent/operator logs (logging data) and sent to ClickHouse for analyzing, so, we could alert on abnormal metrics as well as error/warning logs,

Besides, tracing can be helpful too, more on this lader.

Now let’s have a look at the multi-cluster problem.

For historical reasons, our businesses are deployed across different data centers and Kubernetes clusters. So there are inter-cluster communications without L4/L7 border gateways. This is a problem for access control, as Cilium identity is a cluster scope object.

The community solution to this problem is ClusterMesh as shown here,

ClusterMesh requires each agent to connect to each kvstore in all clusters, effectively resulting in a peer-to-peer mesh. While this solution is straight forward, it suffers stability and scalability issues, especially for large clusters.

In short, when a single cluster down, the failure would soon propagate to all the other clusters in-the-mesh, And eventually all the clusters may crash at the same time, as illustrated below:

Essentially, this is because clusters in ClusterMesh are too tightly coupled.

Our solution to this problem is very simple in concept: pull metadata from all the remote kvstores, and push to local one after filtering.

The three-cluster case show this concept more clearly: only kvstores are involved, 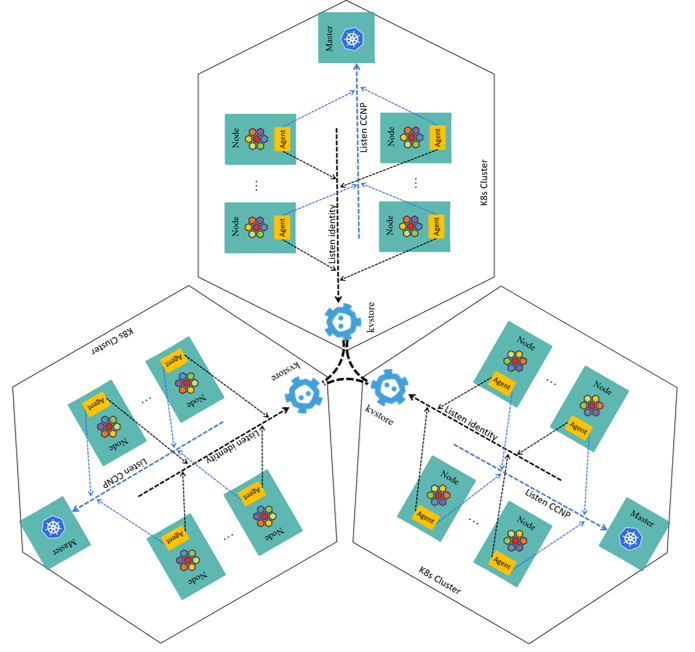 In ClusterMesh, agents get remote metadata from remote kvstores; in KVStoreMesh, they get from the local one.

Thanks to cilium’s good design, this only needs a few improvements and/or bugfixes to the agent and operator [4], and we’ve already upstreamed some of them. A kvstoremesh-operator is newly introduced, and maintained internally currently; we’ll devote more efforts to upstream it in the next, too.

Besides, we’ve also developed a simple solution to let Cilium be-aware of our legacy workloads like virtual machines in OpenStack, the-solultion is called CiliumExeternalResource. Please see our previous blog [8] if you’re interested in.

Now let’s back to some handy stuffs.

The fist one, debugging.

Delve is a good friend, and our docker-compose way makes debugging more easier, as each agent independently deployed, commands can be executed on the node to start/stop/reconfigure the agent.

We’ve tracked down several bugs in this way.

Another useful tool is bpftrace for live tracing.

But note that there are some differences for tracing a process in container. You need to find the PID namespace or absolute path of the cilium-agent binary on the node.

Anyway, after located the target file and checked out the symbols in it,

A more convenient and conciser way is to find the PID namespace and passing it to bpftrace, this will make the commands much shorter:

Now consider a specific question: how could you determine if a CNP actually takes effect? There are several ways:

The most underlying policy state is the BPF policy map in kernel, we can view it with bpftool:

But to use this tool you need to first get yourself familiar with some Cilium data structures. Such as, how an IP address corresponds to an identity, and how to combine Identity, port, protol, traffic direction to form a key in BPF policy map.

The key and value data structures:

bpftool also comes to rescue in emergency cases, such as when traffic is denied but your Kubernetes or Cilium agent can’t be ready, just insert an allow-any rule like this:

Again, this needs a deep understanding about the Cilium data models. such as, with the following three entries inserted into kvstore,

all the cilium-agents will be notified that there is a pod created in Kubernetes cluster1, namespace default, with PoIP, NodeIP, NodeName, pod label and identity information in the entries.

Essentially, this is how we’ve injected our VM, BM and non-cilium-pods into Cilium world in our CER solution (see our previous post [8] for more details); it’s also a foundation of Cilium network policy.

WARNING: manipulation of kvstores as well as BPF maps are dangers, so we do not recommend to perform these operations in production environments, unless you know what you are doing.

We’ve been using Cilium since 1.4 and have upgraded all the way to 1.11 (2022.11 updated) now, it’s supporting our business and infrastructure critical services. With 4 years experiences, we believe it’s not only production ready for large scale, but also one of the best candidates in terms of performance, feature, community and so on.

In the end, I’d like to say special thanks to Andre, Denial, Joe, Martynas, Paul, Quentin, Thomas and all the Cilium guys. The community is very nice and has helped us a lot in the past.