This post digs into the Kubernetes NetworkPolicy model, then designs a policy enforcer based on the technical requirements and further implements it with less than 100 lines of eBPF code. Hope that after reading through this post, readers will get a deeper understanding on how network policies are enforced in the underlying.

Kubernetes provides NetworkPolicy to control the L3/L4 traffic flows of applications. An example is depicted as below, where we would like all pods labeled role=backend (clients) to access the tcp:6379 of all pods with label role=db (servers), and all other clients should be denied [1]:

Below is a minimal NetworkPolicy to achieve the above purpose (assuming all pods running in default namespace):

Kubernetes formalizes this user-facing description, but leaves the implementation to each networking solution as an add-on feature, which means that they can choose to support it or not - if the answer is NO, the network policies you created in Kubernetes would just be ignored.

1.2 How policies could be enforced in the underlying?

Networking or security engineers might wonder: if we were responsible for supporting such a feature, how could we enforce the high-level policy specification in the underlying datapath?

The most straight forward way may be hooking and filtering at the network interface of each Pod. But at the traffic level, all we have are raw packets, which contain MAC/IP/TCP headers instead of labels (e.g. role=backend), as illustrated below: 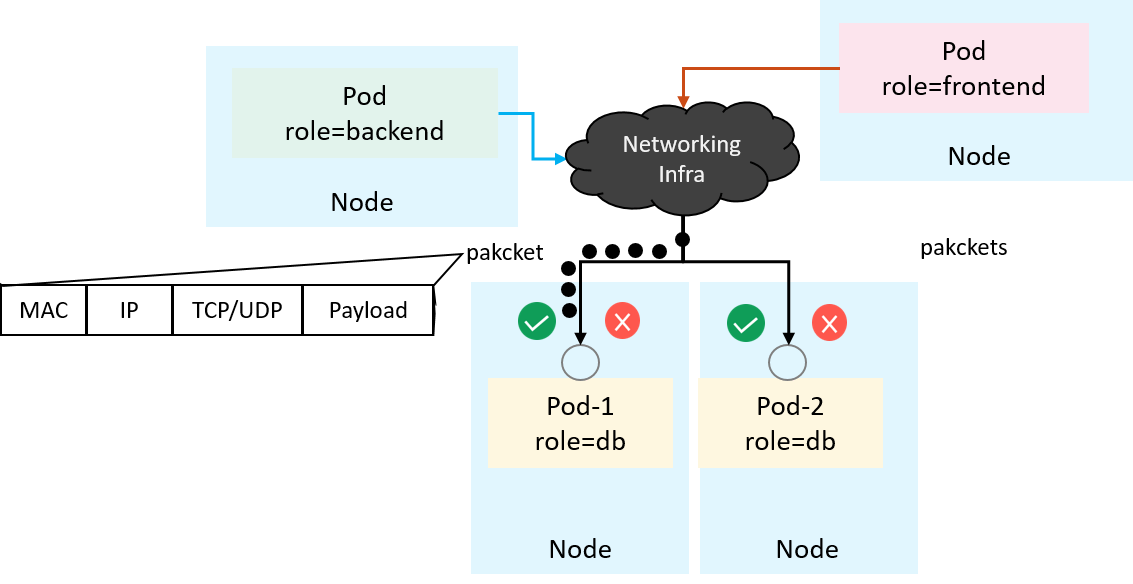 Fig 1-2. A networking and security view of the ingress traffic at Pod's network interface

In summary of the technical question: how could we verdict (allow/deny) a packet or flow while lacking the ability to directly understand the policies described in a high-level language?

This post answers the question by first analyzing the technical requirements, then implement a proof-of-concept policy enforcer from scratch. The toy enforcer is a standalone program, consisting of less than 100 lines of eBPF code, and could run with networking solutions that haven’t supported NetworkPolicies yet, such as flannel.

The remaining of this post is organized as follows:

Now first recap what we have had at hand:

Fig 2-1. What the control/data plane each knows or understands

These two planes speak totally different languages: the former describes resources in high level human-readable formats (e.g. YAML), while the latter is good at handling numerical and arithmetic operations (processing ip addresses, protocol types, ports), so some intermediate stuffs must be introduced to interpret things between them.

Selectors like role=frontend are control plane aware metadata, while the policy enforcer at the dataplane is only good at handling numeric data. So for the NetworkPolicy to be understood by the dataplane, we need to interpret the label-based selector into a numeric one.

To be specific, for those pods that can be selected by a specific group of labels (e.g. role=frontend;namespce=default;), we allocate a numeric ID (e.g. 10002) for them. So there is a one-one mapping between the labels and the numeric ID.

Here we only included two labels role=<role>;namespace=<ns> for identity mapping/allocation, but in reality there be many, such as, one may also would like to include the serviceaccount=<sa> label.

We also need an algorithm to allocate an identity from given labels, but this is beyond the scope of this post. We just hardcode it and pretend that we already have a proper identity allocation algorithm.

To store the labels <-> identity metadata, we need an identity store. 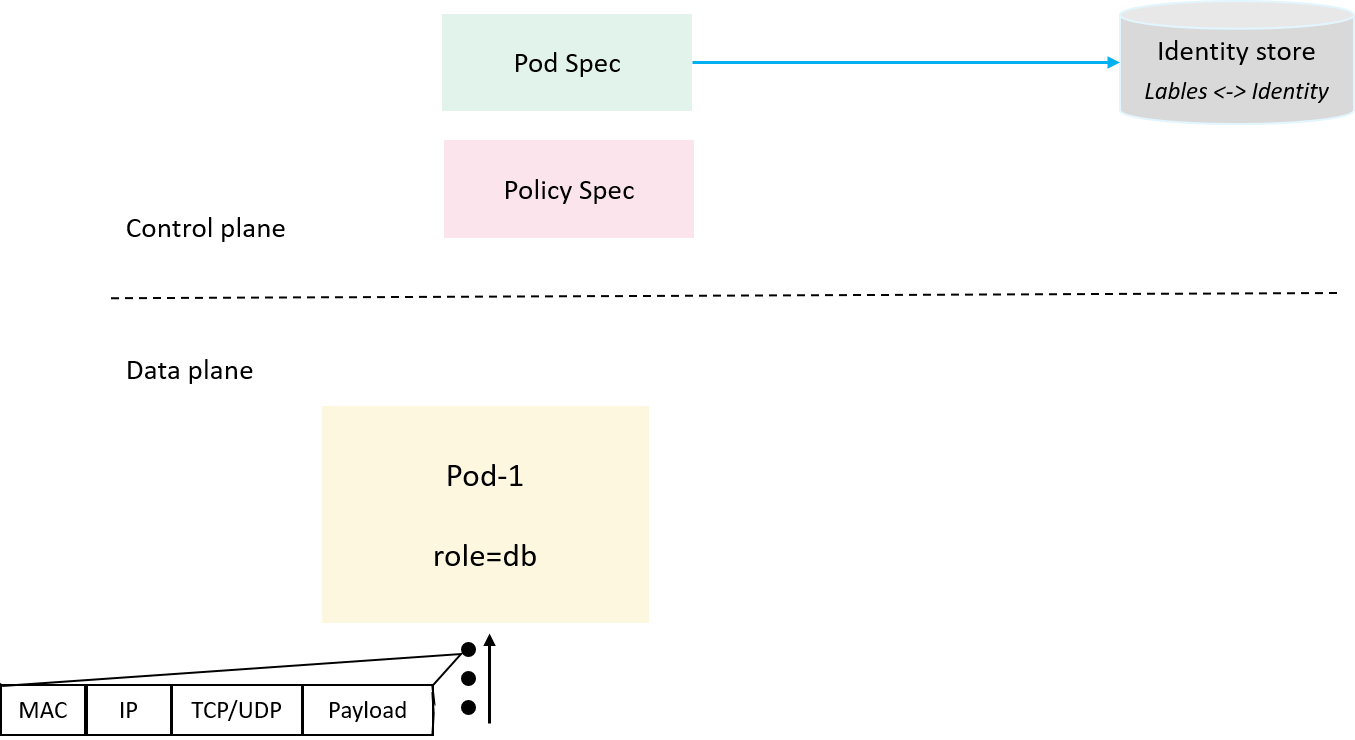 In our design it’s just a simple key-value store, with labels we could get the corresponding identity, and vice verses.

With the structural identities of services turned into numerical identities, we are one step closer to our policy enforcer.

With the labels <-> identity mapping, we can now transform the label-based policy spec into a numeric representation that our dataplane enforcer understands. We also need to save it in a dataplane cache, and we name it policy cache, as shown below, 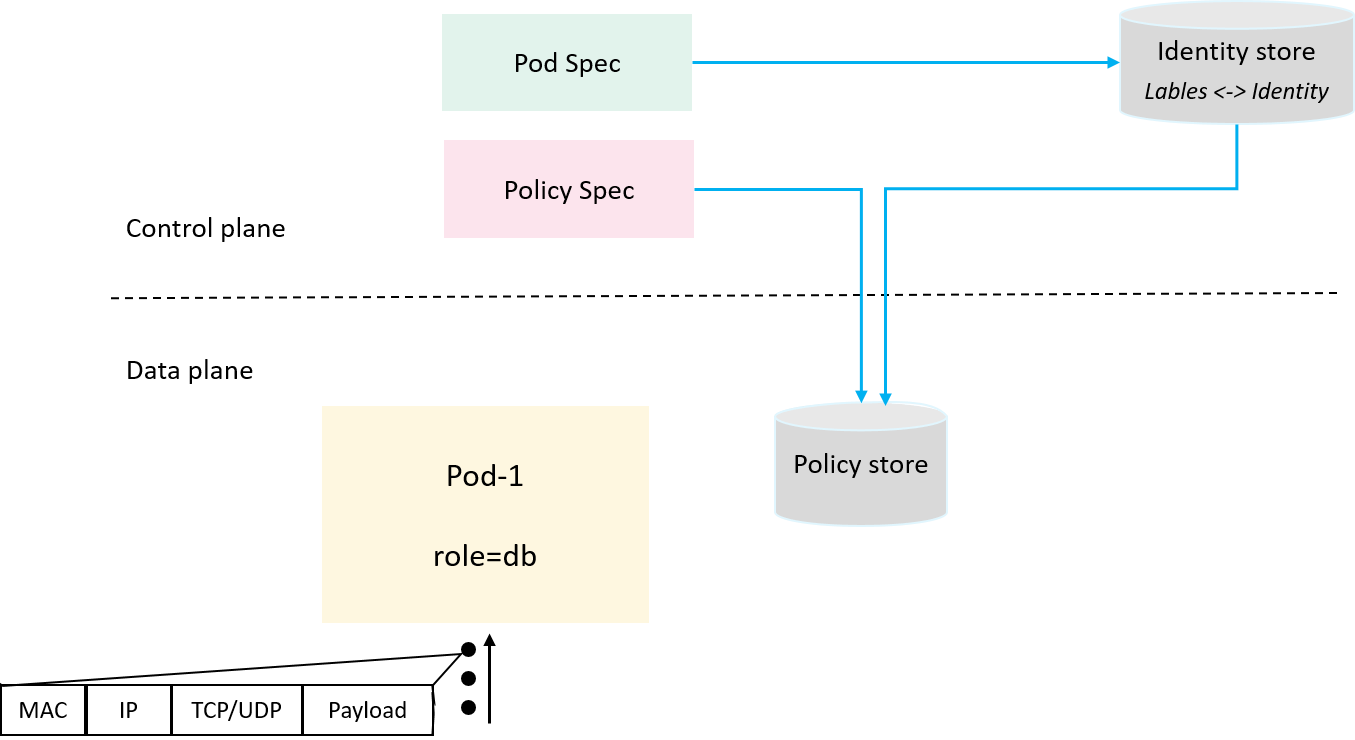 For performance consideration, the policy cache should be designed as a per-node or per-pod cache. Here we use a per-pod model, e.g. for the policy mentioned at the beginning of the post,

We use src_identity:proto:dst_port:direction as key, insert a rule into the cache, the existence of the rule indicates that this src_identity could access this proto:dst_port in that direction.

Table 2-2. Contents of the policy cache for a role=db pod

On receiving a packet, if we could decide which application it comes from (src_identity), then a verdict over the packet can be determined by matching policies in this cache: if a rule is matched, let the packet go, otherwise just drop it.

Now the question turns to: how to correlate a packet to its (the sender's) identity. Enter IP address cache.

While there are many cases when correlating a packet to its identity, here we start from the hard one: user traffic is not modified or encapsulated by the networking solution. This means that we can’t get the identity information from a packet itself directly. Later we will see other scenarios.

Consider the fact that:

So, pod IP can be uniquely mapped to the pod's identity. Thus we introduce yet another cache: mapping pod’s IP to its identity, we call this ipcache and globally share this information, as shown below: 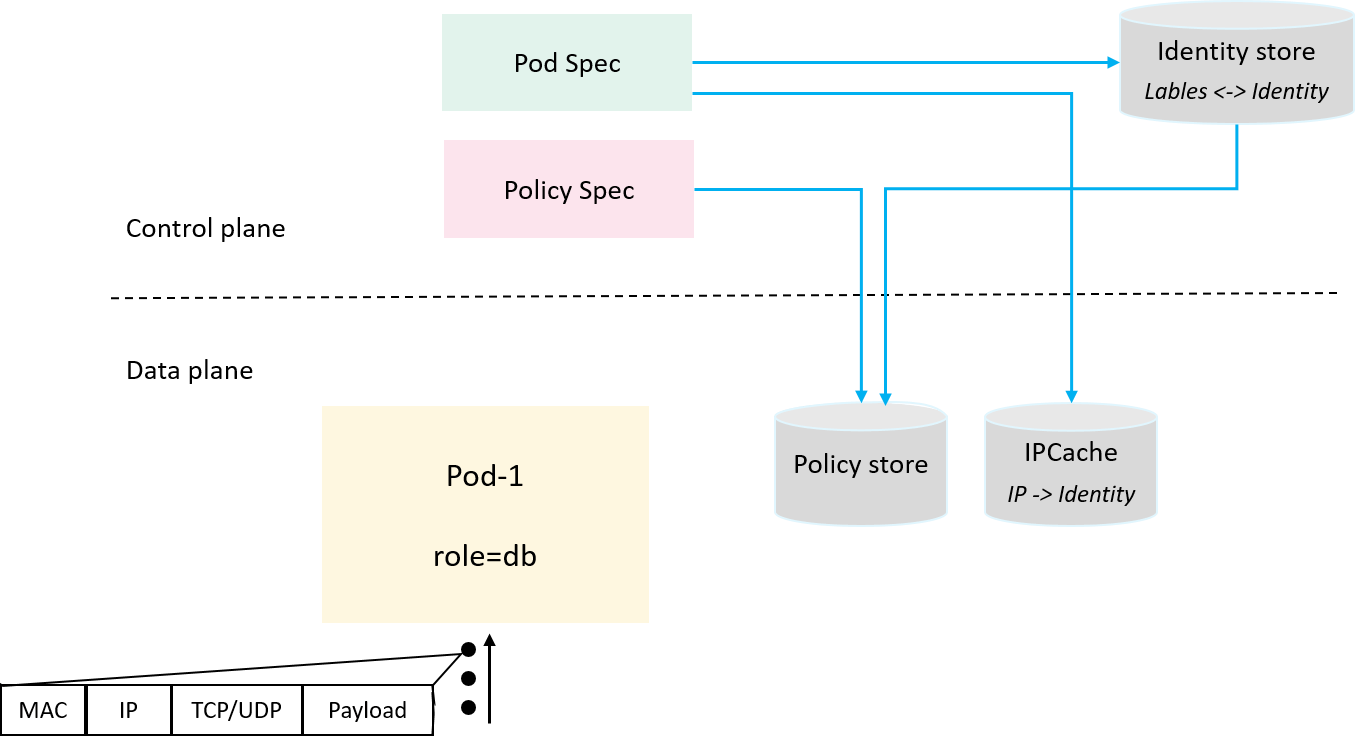 Our puzzle is almost done! Since IP address can be parsed from each packet! Then, with an exact reverse steps through the previous sections, our policy enforcer cloud just decide whether to let the packet go!

Now make up the last piece of our solution: hooking traffic, extract IP/proto/ports information from packet headers, then query and enforce policies: 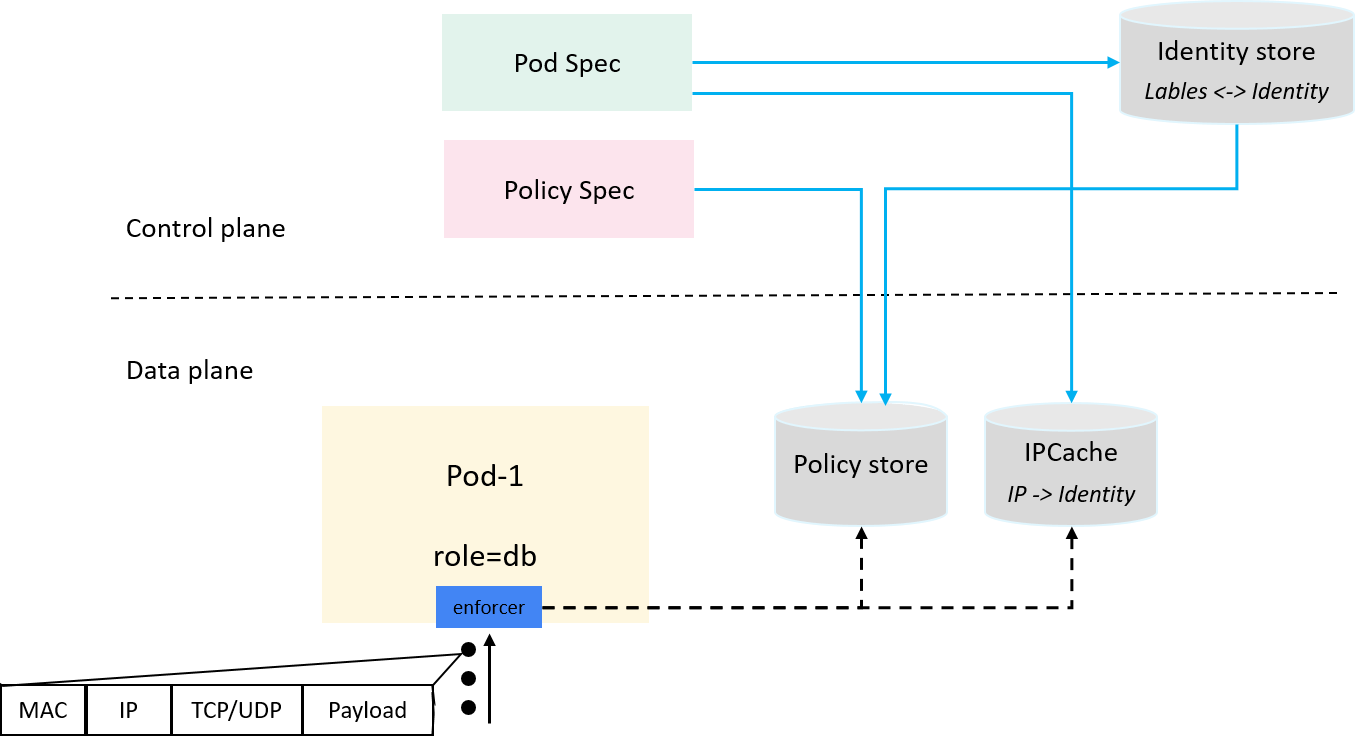 2.6 Compose up: an end-to-end workflow 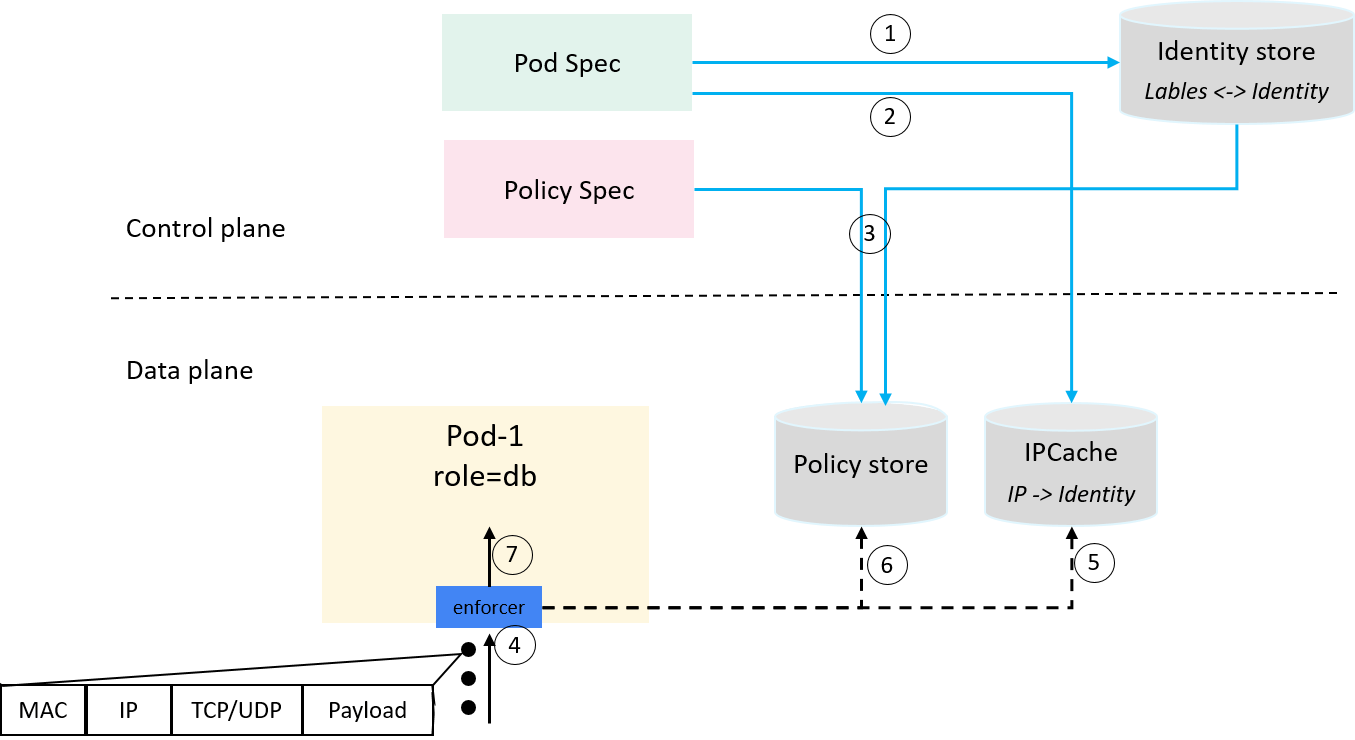 The step 1~3 are control plane related:

Then when client traffic reaches a server pod, our policy enforcer starts to work:

Great, works wonderful, at least in theory! Now let’s implement it with some POC code.

3 Implement the enforcer with eBPF

This post mainly focuses on the dataplane part, so for the POC implementation, we’ll just hardcode something that the control plane does (step 1~3). For the dataplane (step 4~7) part, we use eBPF.

Some macros, constants, structures, as well as our policy cache itself (hardcoded with just one rule):

The datapath logic, including ipcache and policy cache lookup, as well as the main hooking and policy verdict logic:

With an understanding of the design in section 2, this code should be simple enough and just explains itself.

These stuffs will be more clear in the section with examples. Just go ahead if they confuse you now.

For traffic control at Pod’s network interface, whether the traffic comes from the same node or other nodes doesn’t make a difference to us. So we can test the policy in such as simplified topology:

Fig 4-1. Test environment: simulating Pods with containers as they won't make difference for our case

Containers are connected to the default docker0 Linux bridge with veth pairs. We use an official redis docker image, so we can test L4 connectivity easily. We also will use nsenter-ctn to execute commands in a container’s namespace to work around the missing of tools (e.g. ifconfig, iproute2, tcpdump) in the container,

Put the snippet into your ~/.bashrc file then source ~/.bashrc.

Now first check the IP address of each "pod":

Do a redis ping to the role=db container from each client container, the server will return a PONG if all are right:

Just as expected! The result is illustrated as below:

Now let’s load and attach our BPF program to the network interface of the role=db pod. We have two possible places to attach the program:

The final policy effect will be the same, so we just select the second one, as this avoids switching network namespaces when executing commands. Now find the host end of the veth pair for role=db container:

Network devices with unique index 4 and 5 are the two ends of the veth pair, so we look for the ifindex=5 device on the host, which is the device that we’ll attach BPF program to:

Now we can load & attach our BPF enforcer and the hardcoded policy in it:

backend1 and backend2 still ok, but frontend timed out (as its packets got silently dropped by our enforcer according the policy), just as expected:

Fig 4-3. With a policy: frontend pod is denied and backend pods are allowed

Now remove the BPF enforcer and policy and test again:

We could also support a default allow any policy, which has the lowest priority, and behaves just like there is no policy at all. With this design, our toy policy enforcer could be loaded and attached when a pod is created, and detached and removed when the pod is destroyed - consistent with the life cycle of the pod. The effect illustrated:

Fig 4-4. Default allow-any policy: enforcing at the host side of the veth pair

And the equivalent if you’re attaching the BPF program to the container side of the veth pair:

Fig 4-5. Default allow-any policy: enforcing at the container side of the veth pair

The default policy can be achieved easily: we can denote a special {0, 0, 0, 0} rule as the default allow any rule, then the inital policy cache for a pod will look like the following:

As long as the user adds a specific policy, the agent for maintaining the policy cache should remove this default rule.

We also embedded some logging code in the source for debugging. To use it, first make sure the tracing switch is turned on:

then cat the trace pipe to check the log:

This ends our implementation and verification part, and in the next, let’s talk about some important stuffs in depth.

5.1 Towards a practical NetworkPolicy solution

To extend our design & implementation into a practical NetworkPolicy solution, more things need to be done, just to name a few:

If all these stuffs have been resolved, you’ll get a native eBPF-based policy engine for Kubernetes. If time dates back to 2015, you could even name it Cilium!

In the underlying, Cilium works much the same way as the toy enforcer in this post. To be specific, the components of our toy design can be directly mapped to the corresponding components in Cilium:

One thing we haven’t mentioned yet is that: the transparency property (transparently hooking and filter traffic) of our toy enforcer to the upper networking infrastructures makes it co-workable with some networking solutions that haven’t supported network policy yet, such flannel. This is also why Cilium supports CNI chaining with flannel.

5.3 Reflecting on the Kubernetes networking model

With all have been discussed above, it’s interesting to reflect on the Kubernetes networking model.

Kubernetes utilizes an "IP-per-Pod" model, which has three principles, let cracking them down and see what that implies to policy solution design:

This post designs an educational policy engine for Kubernetes NetworkPolicy , and implements it in less than 100 lines of eBPF code (with no surprises, code snippets stole from Cilium project, and intentionally named variables/functions in the Cilium style).

After reading through this post, users should be more familiar with the underlying working mechanisms of access control in Kubernetes+Cilium.