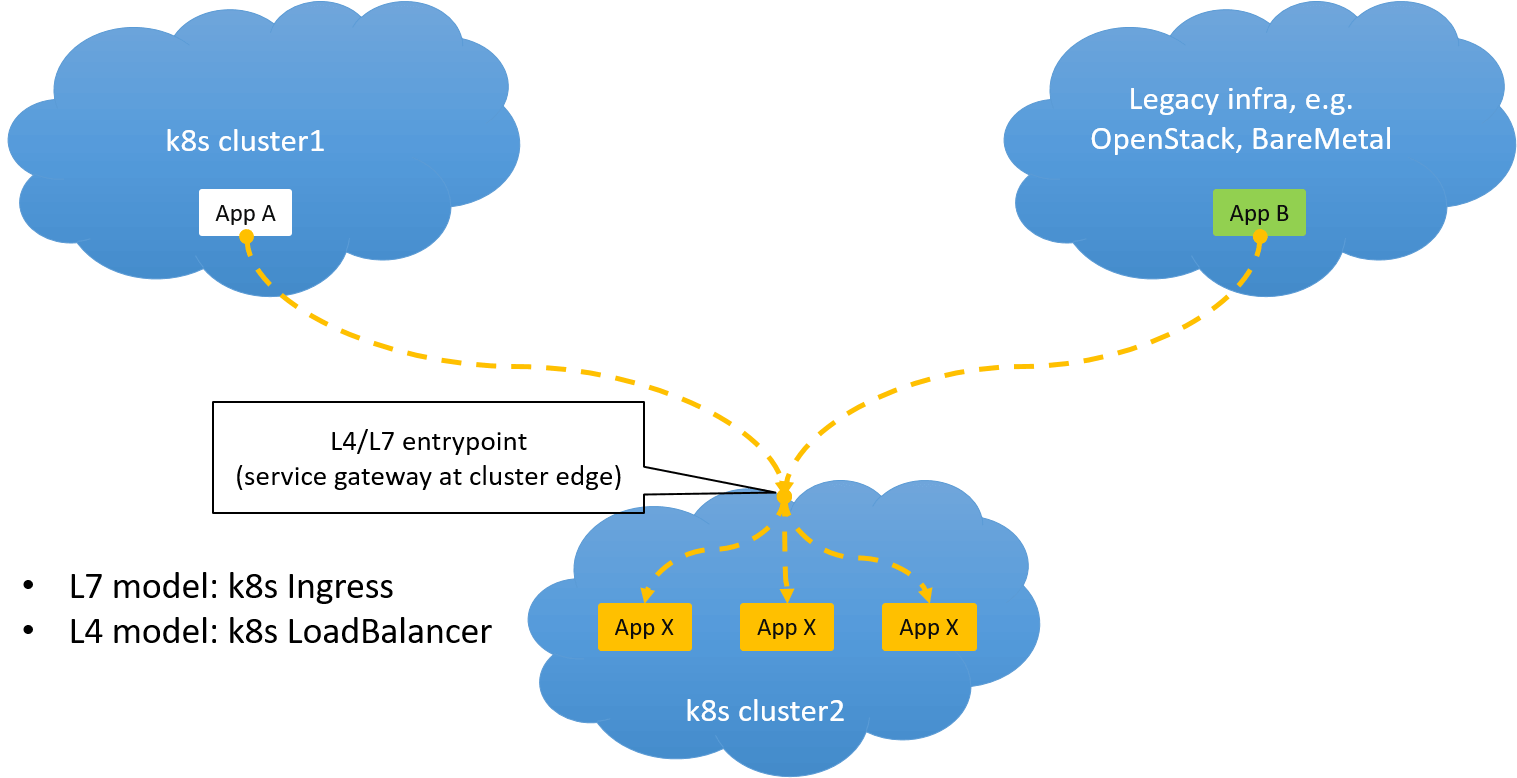 Fig. 0.1 Exposing a Kubernetes service to outside world

But, it leaves the implementations to each vendor. For example, if you are on AWS, it provides ALB and ELB, each for layer 7 and layer 4.

This post reasons about the design of the latter one, and provides a simple implementation by combining open source softwares.

Now the question is: how would your legacy applications (e.g. running in bare metal or VM) or applications in other Kubernetes clusters access this DNS service? As depicted in Fig 1.1:

Fig. 1.1 Exposing DNS service in a Kubernetes cluster to outside world

At first glance, it seems that the classic layer 4 load balancer (L4LB) model could be used to address this problem, that is: 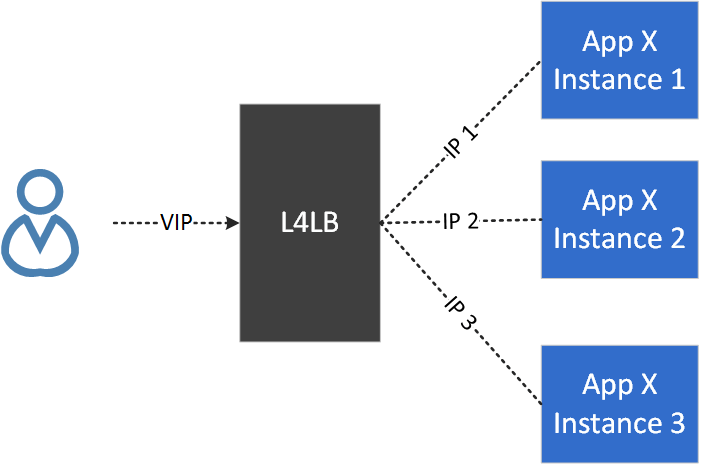 Well, this’s on the right way, but lacks some important aspects.

First, our backends (Kubernetes pods) are very dynamic and subject to frequent changes: kinds of failures (or internal scheduling) may trigger Kubernetes to kill or reschedule a pod. This may happen frequently;

Secondly, the IP address of a Pod is not immutable. In comparison, traditional L4LBs favor fixed IP backends, they just pull in or pull out existing backends by health check status.

Thirdly, backends may be scaled up/down according to capacity plans, these backend changes should be timely reflected on L4LB, and be transparent to your users/clients without human interventions (some kind of service discovery).

This makes the L4LB a very unique role:

Now we summarize the above into following technical needs:

For production ready, it also involves the 4th requirement:

\ 4. High availability: both software and hardwares (if there are).

In this article, we show such a (simple) design/implementation for on-premises bare metal kubernetes clusters. 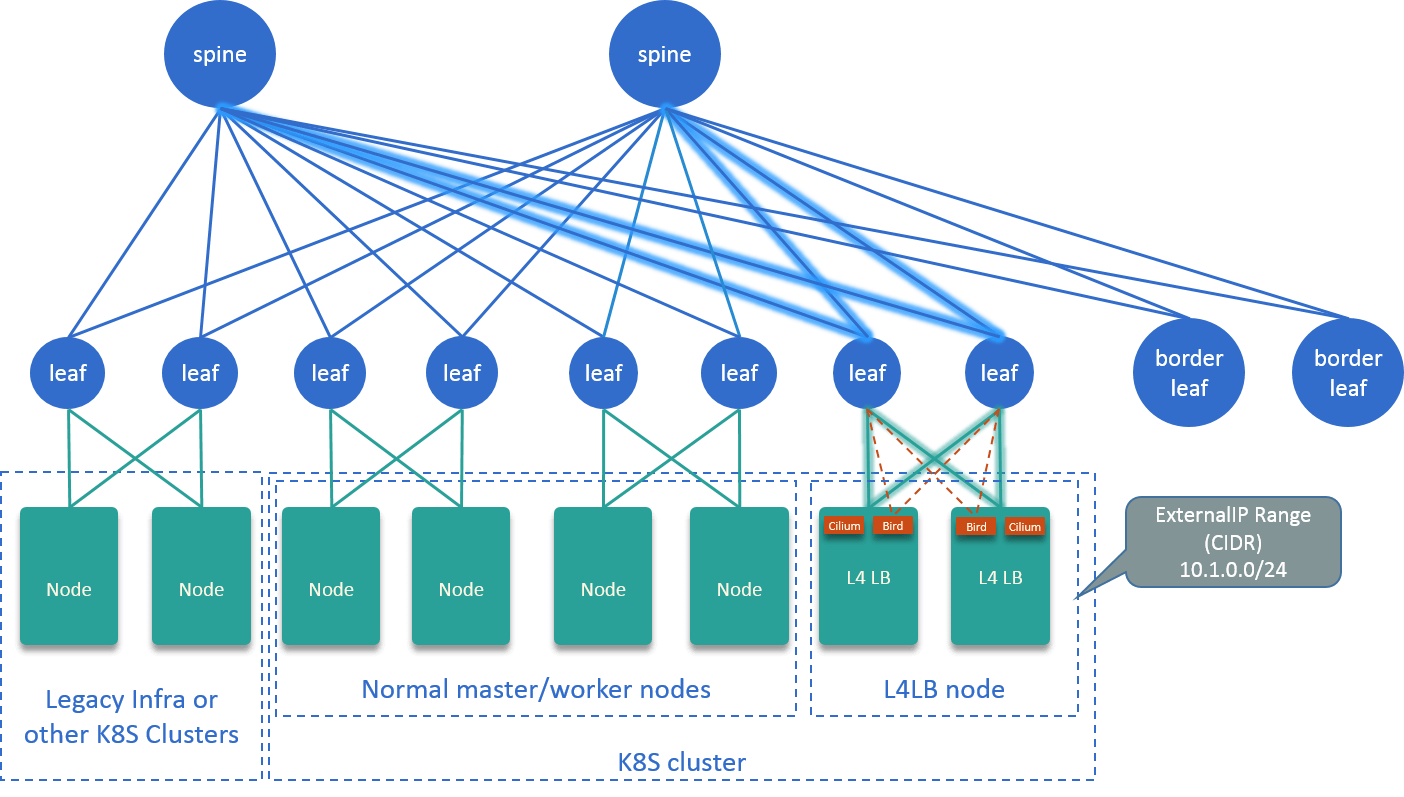 Fig. 3.1 Topology of our L4LB solution

The overall design is depicted in Fig 3.1:

Traffic path when accessing the example service from the outside world:

Where, the four numbered steps in the graph are:

Details explained below. Let’s see how it meets the 4 requirements listed in Section 2.3.

cilium-agent on L4LB node will listen to Kubernetes apiserver, and generate BPF rules for Kubernetes ExternalIP services to forward traffic from VIPs (which are held by L4LB nodes) to backend pods.

This solves the 2nd and 3rd requirement: load balancing and timely react to backend changes.

With ECMP (Equal Cost Multiple Path) enabled, we could have multiple L4LB nodes announcing the same CIDR, HW routers will load balancing those packets to our L4LB nodes (glowing links in Fig 3.1 & Fig 3.2).

Besides, there is another BGP optimization option called Bidirectional Forwarding Detection (BFD), enable it between routers and bird will accelerate routes convergence inside the entire network.

Till now, packets with destination IPs within CIDR (VIPs) will arrive our L4LB nodes, and cilium-agent will generate forwarding rules for those VIPs.

But one part is still missing: there are no rules in the kernel to redirect those packets into cilium-agent’s processing scope. So without additional work, those packets will be dropped inside kernel, instead of be forwarded to backends by Cilium BPF rules, as shown in Fig 3.3: 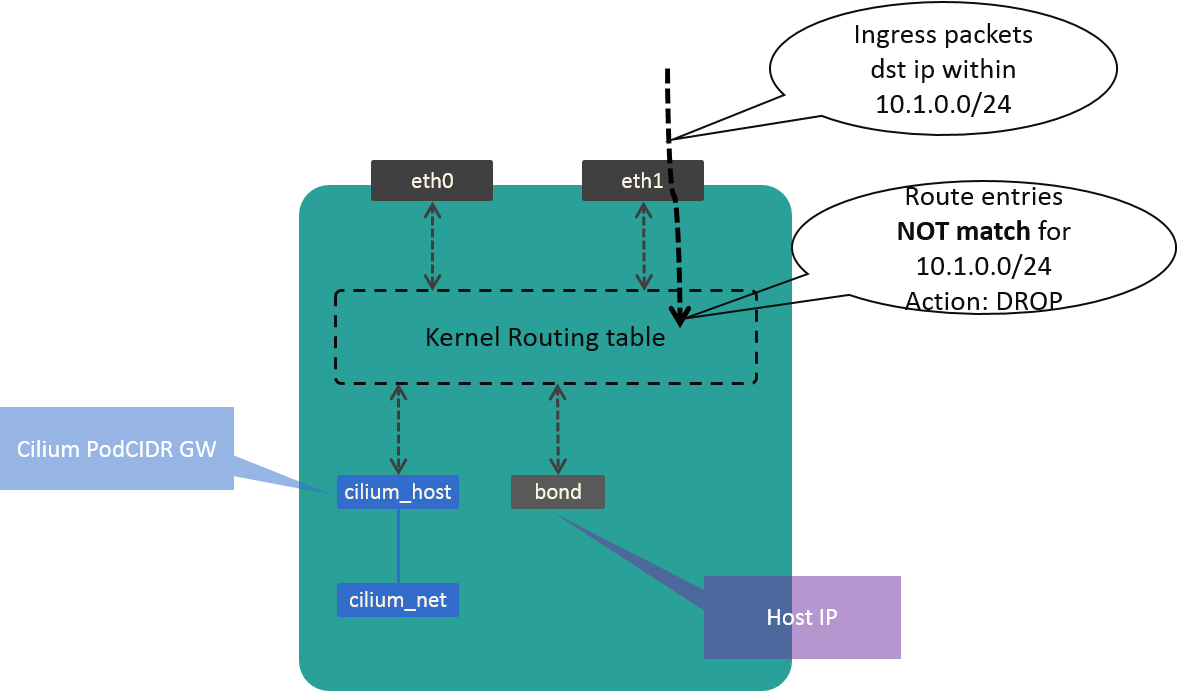 Fig. 3.3 Packets dropped in kernel due to no routing rules

So we need some glue work to fill the gap. Our solution is create a dummy device, which holds the first IP in our CIDR. 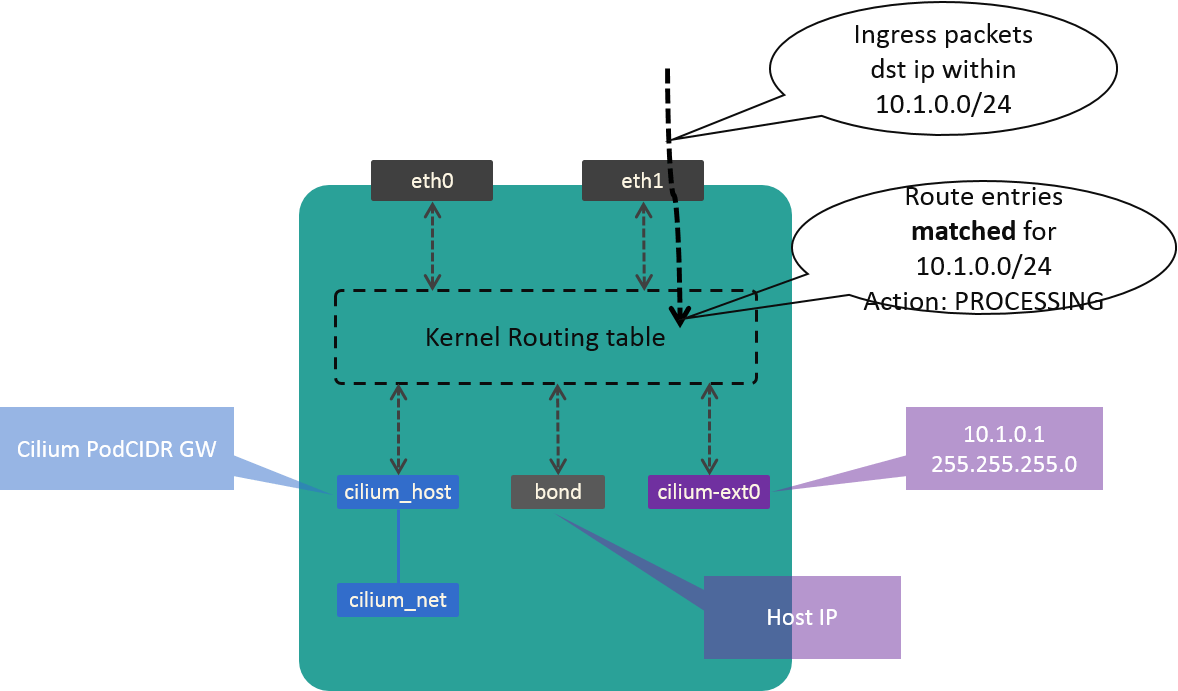 Beside, this post assume the Kubernetes cluster uses direct routing for Pod networking. (While adjust Cilium configurations will also make this scheme work for non-direct-routing cases, that’s beyond the scope of this post).

Configure it to survive host reboot:

This involves BGP configurations for the bird software, as well as HW routers. Configurations may vary a lot according to the BGP schemes you choose, the latter is beyond the scope of this post. Refer to some get started docs, such as the one we wrote: Cilium documentation: Using BIRD to run BGP.

Normal installation according official documents, as long as the agent could listen to kubernetes apiserver.

Note that if using DSR mode, both L4LB and worker nodes needs to be configured as DSR.

ECMP needs to be configured on physical routers.

BFD should be configured both on physical routers and bird. Refer to Cilium documentation: Using BIRD to run BGP.

If everything is ok, you should see something like this on your routers:

For nothing but laziness, I will use my handy nginx service instead of deploying a real DNS service - but the effect is much the same, we will verify our scheme by accessing the nginx from layer 4.

On Kubernetes master, create a service with externalIPs=10.1.0.2:

iproute2 on my current L4LB node is too old, which prohibits my further investigation. You could refer to my previous post Cilium Network Topology and Traffic Path on AWS if intersted.

On a node which is outside of Kubernetes cluster, test our externalIP service with VIP+Port:

It’s important to understand that, in this L4LB scheme, there are no couplings between BGP agent and host network agent, that is,

If think of each TOR pair and corresponding L4LB nodes as an integral entity, Fig 3.2 could be re-depicted as Fig 5.1: 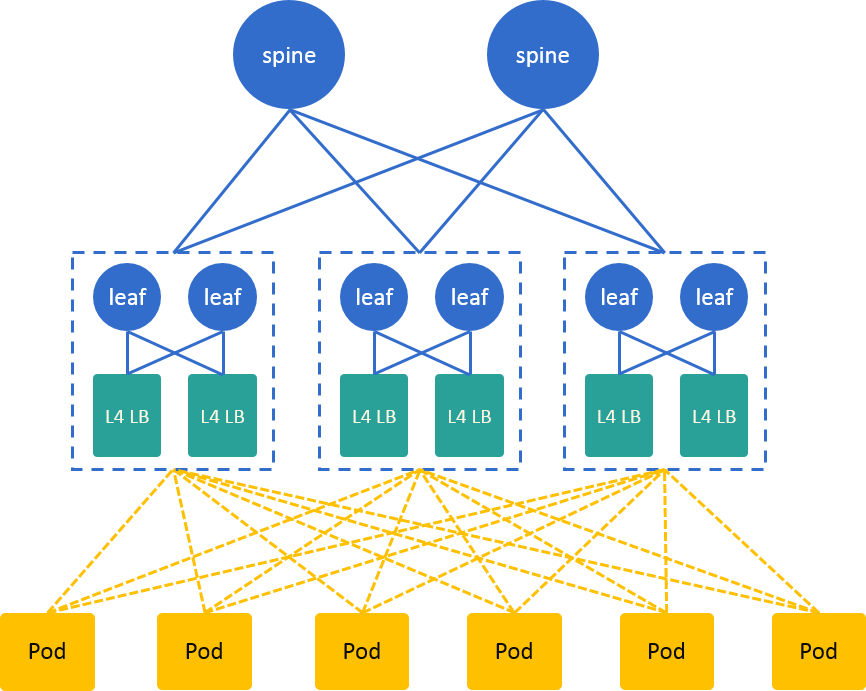 which is a CLOS network.

Ingress provides persistent L7 entrypoints for accessing services inside Kubernetes cluster from outside world. For example,

Have you wondered how to design an Ingress solution?

If your Ingress is deployed inside Kubernetes cluster, then itself must have a persistent L4 entrypoint, namely the <ingress addr> in the above example.

Combining the L4LB solution in this post and something like Istio Gateway, you will get a workable Ingress.

MetalLB is similar with this in that it:

Katran is a general purpose L4LB from Facebook, also based on BGP + BPF.

As mentioned in 5.2, replace Cilium with kube-proxy could also achieve this goal. Differences including:

This post analyzed the technical requirements of L4LB for Kubernetes clusters, and realized a simple one based on Cilium+BGP+ECMP.