This post first appeared as Limiting access to Kubernetes resources with RBAC, which was kindly edited, re-illustrated and exemplified by learnk8s.io, and very friendly to beginners.

The version posted here in contrast has a biased focus on the design and implementation, as well as in-depth discussions.

This post digs into the Kubernetes RBAC authorization (AuthZ) model.

Hope that after reading this post, readers will have a deeper understanding on the access control (AuthZ) of kube-apiserver.

These two spelling-alike but conceptially-different terms have confused people for quite a while. In short,

For example, Bob issues a GET /api/databases?user=alice request to a server, intending to get the database list of Alice,

Fig 1-1. AuthN and AuthZ when processing a client request

then the server would perform following operations sequentially:

This post will focus on authorization (AuthZ). Actually, there are already many models designed for AuthZ, among them is RBAC (Role-Based Access Control).

RBAC is a method of regulating access to server-side resources based on the roles of individual users within an organization. The general idea is that instead of directly binding resource accessing permissions to users with (User,Permission,Resource) as shown below,

RBAC introduces the Role and RoleBinding concepts, described with (User,RoleBinding,Role,Permission,Resource), and facilitates security administration in large organizations with lots of users permissions: 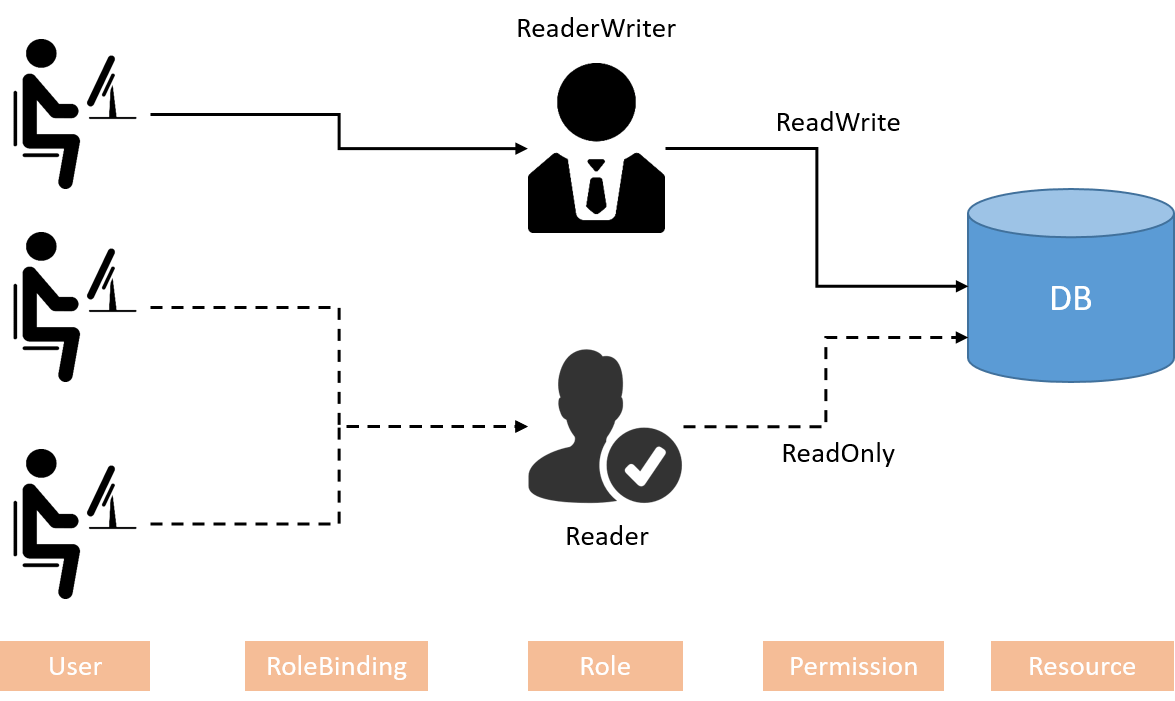 RBAC is not a recent invention, but can date back to couples of years ago. In fact, it is an approach for implementing mandatory access control (MAC) and discretionary access control (DAC), refer to [2,3] for more information.

K8s implements a RBAC model (as welll as several other models) for protecting resources in the cluster. In more plain words, it manages the permissions to kube-apiserver’s API. With properly configured RBAC policies, we can control which user (human or programs) can access which resource (pods/services/endpoints/…) with which operation (get/list/delete/…).

Configure authorization mode for the cluster by passing --authorization-mode=MODE_LIST to kube-apiserver, where MODE_LIST is a comma separated list with the following valid values: RBAC/ABAC/Node/AlwaysDeny/AlwaysAllow.

As an example, if you’ve played around for a while with Kubernetes, you’d have seen things like this:

This is just a permission declaration in Kubernetes’ RBAC language, after applied, it will create:

1.4 Purpose of this pose

This post will digs into the RBAC model in Kubernetes by designing it by ourselves.

Specifically, given the following requirements: granting read (get/list/watch) permissions of the following APIs in kube-apiserver to an application (app1) in the cluster:

Let’s see how we could design a toy model to fulfill the requirements.

In Kubernetes, authorization is a server side privilege-checking procedure against the incoming requests from an authenticated client. In the remaining of this section, we will split our modeling work into several parts:

Let’s start from the simplest case, then gradually go through the complex ones.

The first case: suppose your new colleague would like to log in the Kubernetes dashboard, or to use the CLI. For this scenario, we should have a concept in the model to denote what’s an "account" or a "user", with each of them having a unique name or ID (such as email address), as shown below:

Fig 2-1. Introdecing User: identify human users and other accounts outside of the cluster

Then we can refer to a user with something like the following in a YAML file:

Note that the User concept introduced here is used for human or processes outside of the cluster (as opposed to the ServiceAccount concept that will described in the next, which identifies accounts created and managed by Kubernetes itself). For example, the user account may come from the LDAP in your organization, so AuthN of the user may be done through something like OAuth2, TLS certificates, tokens; the subsequent AuthZ process will be the same as ServiceAccount clients.

Most of the time, it is applications inside the Kubernetes cluster instead of human users that are accessing the kube-apiserver, such as

As those applications are created and managed by Kubernetes, we’re responsible for their identities. So we introduce ServiceAccount (SA), a namespaced account for an application in a Kubernetes cluster, just like a human account for an employee in a corp.

As SA is an application level account, all pods of an application share the SA, thus have exactly the same permissions. SA is introduced and will be stored in Kubernetes, so we can define a ServiceAccount with the following YAML specification:

We can not define a User as they are managed by external systems outside of Kubernetes, such as LDAP or AD. Instead, we can only refer to Users.

Then refer it with:

To facilitate Kubernetes administration, we’d better also to support a group of Users or ServiceAccounts,

Fig 2-3. Introducing Group: a collection of Users or ServiceAccounts

For example, with this capability, we could refer all ServiceAccounts in a specific namespace:

With several client types being introduced, we’re now ready to introduce a general container for them: Subject. A subject list could contain different kinds of client types, such as

Fig 2-4. Introducing Subject: a general representation of all kinds of clients and client groups

With the client side identification accomplished, let’s see the server side.

The server side part is more complex, as this is where we will have to handle the authorization and authentication.

Again, we start from the smallest unit.

Objects like pods, endpoints, services in a Kubernetes cluster are exposed via built-in APIs/URIs, such as,

These URIs are too long to be concisely described in an AuthZ policy specification, so we introduce a short representation: Resource. With Resource denotation, the above APIs can be referred by:

To describe the permitted operations on a given Resource, e.g. whether read-only (get/list/watch) or write-update-delete (create/patch/delete), we introduce a Verb concept:

One thing we have intentionally skipped discussing during the Resource section: apart from APIs for built-in objects (pods, endpoints, services, etc), Kubernetes also supports API extensions. Such as, if using Cilium as networking solution, it will create “ciliumendpoint” custom resources (CRs) in the cluster,

Check the related objects already in the cluster:

These custom resource objects can be accessed in a similar URI format as the built-int objects,

So, to make our short format resource denotation more general, we need to support this scenario, too. Enter APIGroup. As the name tells, APIGroup split APIs (resources) into groups. In our design, we just put resources and related verbs into an apiGroups section:

Depending on the "name" of an APIGroup, 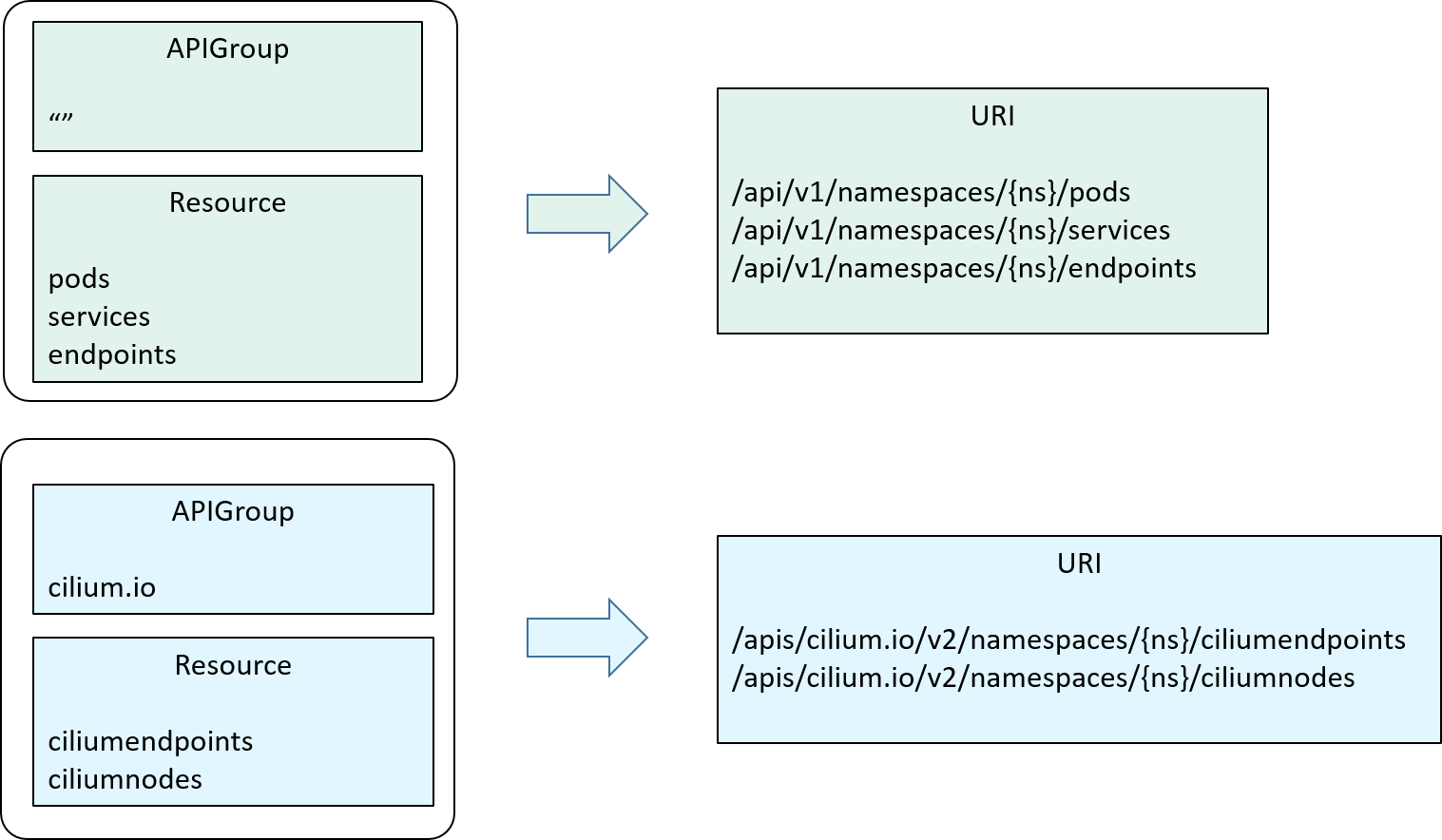 Fig 2-6. Introducing APIGroup, and how APIGroup+Resource are expanded in the behind

With APIGroups as the last piece introduced, we can finally describe what's an AuthZ Rule: actually it’s nothing more than an apiGroup list that are allowed to be accessed,

2.4 Who has the permissions described by a Rule: introducing Role

With Rules and Subjects ready, we can assign Rules to Subjects, then clients described subjects will have the permissions to access the resources described in the rules. But as has been said, RBAC characterizes itself by Roles, which decouples individual users from individual rules, and makes privilege sharing and granting more powerful and managable.

So, instead of directly inserting rules into a Subject (Account/ServiceAccount), we insert it into a Role:

Note that we introduce Role as a kind of resource in Kubernetes, so here we have an apiVersion field in the yaml, while Resource, APIGroup, Verb are just internal concepts (and data structures).

Now we have Subject to referring to all kinds of clients, Rule for describing allowed resources, and also Role to describe who different kinds of rules, the last thing for us is to bind target clients to specific roles. Enter RoleBinding.

A role binding grants the permissions described in a Role to one or multiple clients. It holds a list of Subjects (users, groups, or service accounts), and a reference to the role being granted.

For example, to bind the viewer role to Subject kind=ServiceAccount,name=sa-for-app1,namespace=demo-namespace,

Note that RoleBinding is also introduced as a kind of Kubernetes resource, so it has apiVersion field.

Now our RBAC modeling finished, let’s see an end-to-end workflow: how to setup Kubernetes RBAC stuffs to allow an application to list ciliumnetworkpolicies resources in the cluster.

Note that if AuthN or AuthZ failed, kube-apiserver will return directly with a proper error message. Besides, we’ve also drawn a human user in the subject list when perform RoleBinding, which is the case when the client is an out-of-cluster user or program.

With no surprises, the RBAC model we’ve designed is a simplified version of the one shipped with Kubernetes (rbac.authorization.k8s.io API). Hope that through this bottom-up approach, you’ve had a better understanding of the RBAC model and related concepts.

In the next section, we’ll have a quick glimpse of the RBAC implementations in Kubernetes.

Without make this post too long, we just point to some of the key data structures:

A Role sets permissions within a particular namespace. If you’d like to set namespaceless roles, you can use ClusterRole (and the corresponding ClusterRoleBinding).

In perticular, some Kubernetes resources are not namespace-scoped, such as Persistent Volumes and Nodes.

4.2 Default roles and clusterroles in Kubernetes

To see the detailed permissions in each role/clusterrole,

Service accounts are usually created automatically by the API server and associated with pods running in the cluster. Three separate components cooperate to implement the automation:

Service account bearer tokens are perfectly valid to use outside the cluster and can be used to create identities for long standing jobs that wish to talk to the Kubernetes API. To manually create a service account,

The created secret holds the public CA of the API server and a signed JSON Web Token (JWT).

The signed JWT can be used as a bearer token to authenticate as the given service account, and is included in request headers. Normally these secrets are mounted into pods for in-cluster access to the API server, but can be used from outside the cluster as well.

A Kubernetes cluster has two categories of users [4]:

In this regard, Kubernetes does not have objects which represent normal user accounts. Normal users cannot be added to a cluster through an API call. But, any user that presents a valid credential is considered authenticated.

In contrast, service accounts are users managed by the Kubernetes API. They are,

The above specification can be re-write in the following format:

which reduces lines significantly, and is more concise. But Kubernetes internally still manages the content with long-format:

From the documentation, in Kubernetes,