This post digs into the design and implementation of the TCP listen queues in Linux kernel. Hope that after reading through this post, readers will have a deeper understanding about the underlying working mechanism of TCP/socket listening and 3-way handshaking, as well as related kernel configurations and performance tunings. 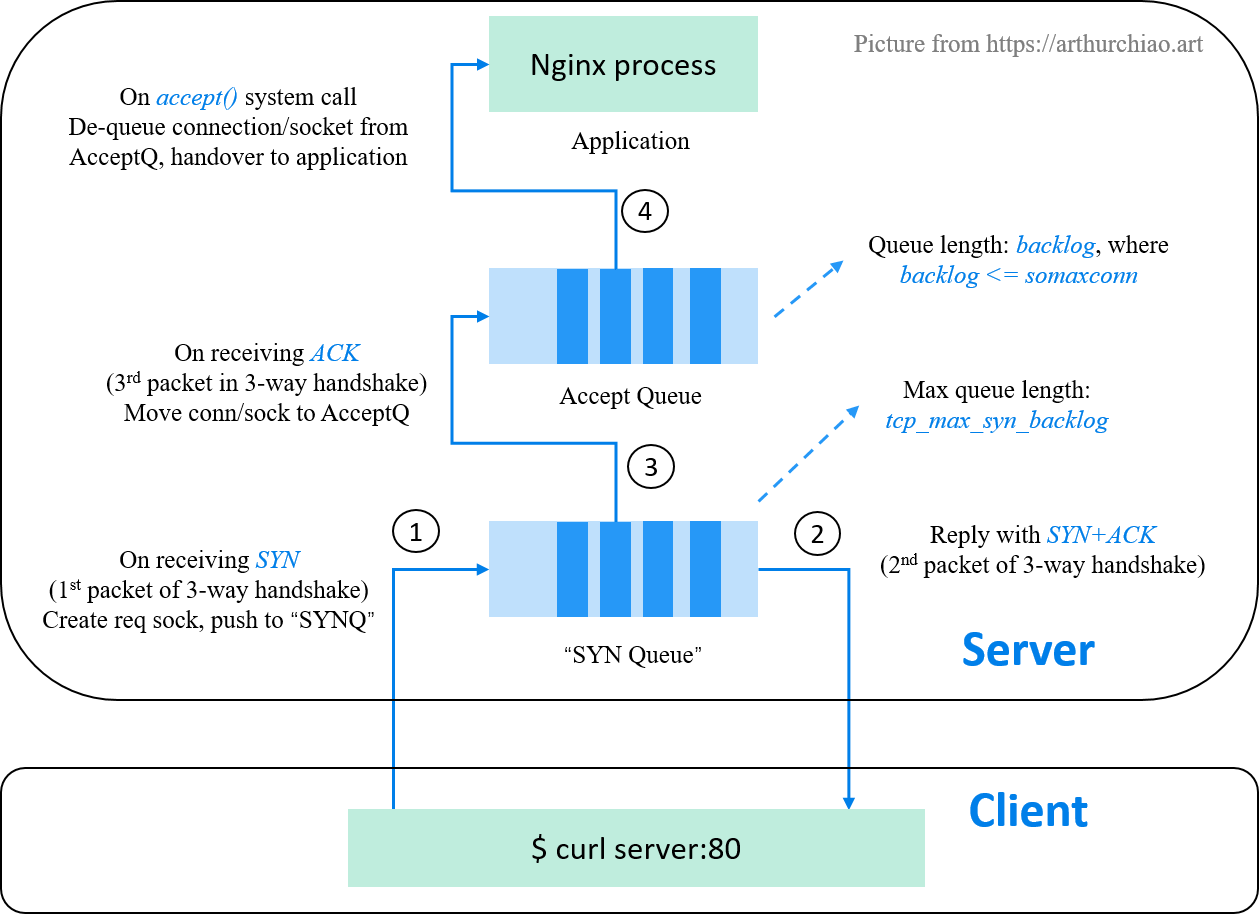 On encountering problems related to TCP listen overflow, listen drop etc, almost all search results on the internet will tell you that there are two queues for each listening socket:

While this is a right answer for most cases, it’s also a fairly high-level answer which may be not thathelpful for solving the tricky and specific problems you’re facing. The latter needs a deep and thorough understanding about the relationships and working mechanism of the queues, such as,

To answer these questions, we need first go back to history, to see what’s the technical requirements of the LISTEN operation. To avoid being superfluous, we’ll narrow down our scope to TCP/IPv4 socket in this post.

The TCP/IP specification defines the expected behavior of the famous 3-way handshake (3WHS):

But if you’re a devloper to implement these interactions for a LISTEN state socket, you’ll soon meet many practical challenges, such as:

This is why the queues come in place: the protocol only standardized the expected behavior, but for a real implementation of the protocol, tons of stuffs need to be concerned and designed; in other words, the two-queue mechanism is implementation related, rather than protocol related.

With the origin found, let’s get a deeper understanding about the technical requirements and solutions.

With the 3-way handshake mechanism in TCP, an incoming connection will go through an intermediate state SYN_RECV before it reaches the ESTABLISHED state and can be returned by the accept() syscall to the application. This means that a TCP/IP stack (server side) has two options to implement the backlog queue:

On Linux, things are different, as mentioned in the man page of the listen syscall:

This indicates that modern Linux kernels use the second option with two distinct queues:

Is this the truth (two distinct & real queues) in the Linux implementation?

1.3 Where are the queues in Linux kernel code?

While it’s not too hard to find the accept queue in kernel code, you’ll soon realize it’s not that easy to locate the former one; what makes things even strange is that code that seems like updating the length of SYN queue, eventually updates the fields of the accept queue.

With these doubts in mind, you may wonder like me: does SYN queue really exists? (Careful readers may have already noticed that the phrase of “SYN queue” has been double quoted in the previous sections.)

This post tries to answer the above question by digging into the kernel code, and the kernel code will be based on 5.10. Apart from that, we’ll also discuss some related issues in real environments.

The remainings of this post is organized as follows:

With all these background knowledges,

If you prefer quick answers and takeaways, jump to section 6 directly.

Before digging inside, we need to clarify some socket related structures in the kernel. 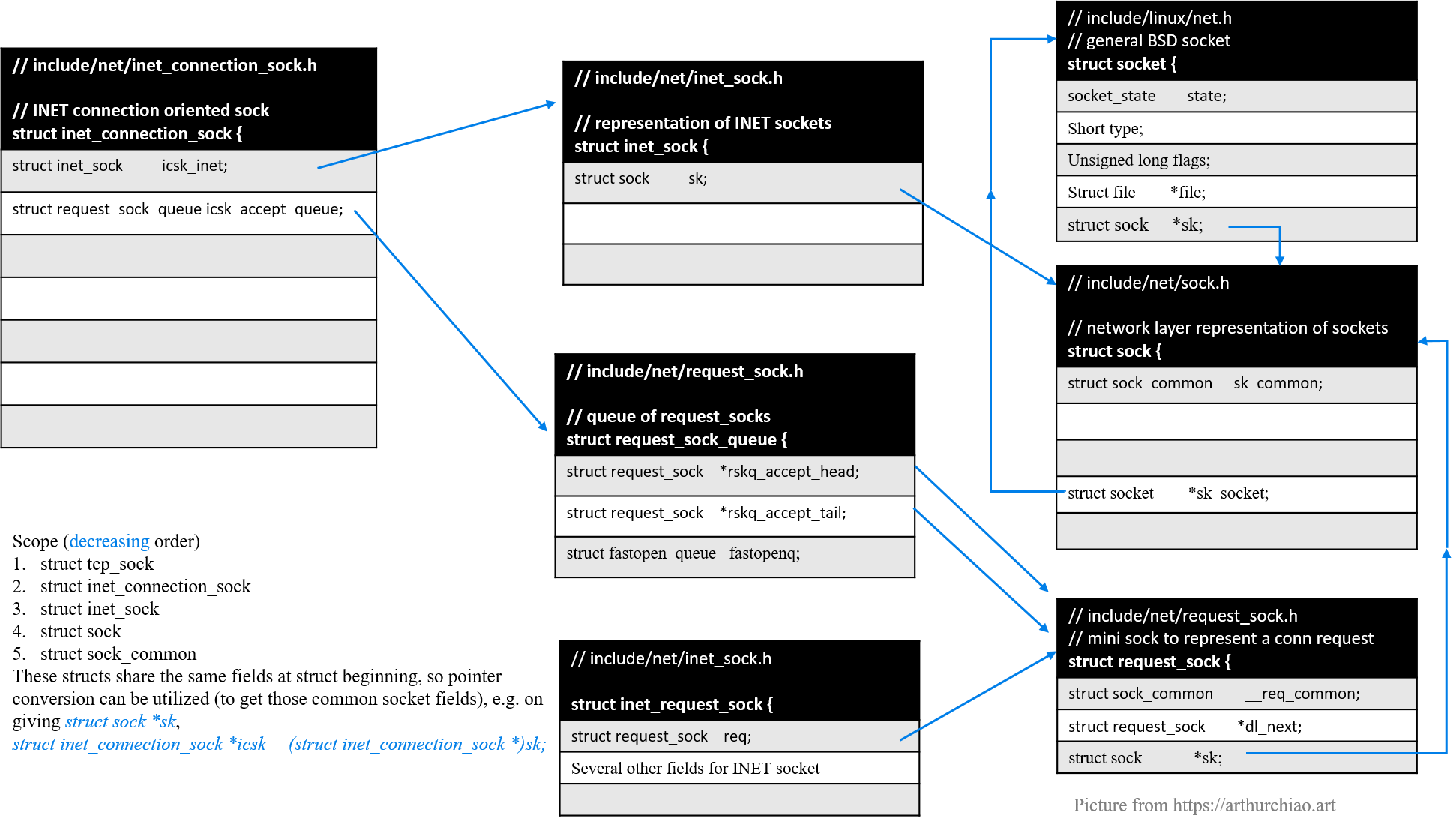 struct request_sock is a general request structure, for specific connection types, such as INET connection request, more fields are needed to describe the INET parameters, and this is where strcut inet_request_sock comes to place:

In the same sense, more fields are needed to describe a TCP INET socket request, which is where struct tcp_request_sock comes out:

Spoiler: the kernel actually declares the accept queue with this data structure,

Also note that the FIFO queue it maintains contains items of struct request_sock type (but the kernel code has the magic to obtain inet/tcp request sock with the general data structure). We’ll see this later.

Now let’s have a look at the structures representing kernel socket objects at different levels of abstraction.

This is high level socket structure:

The struct sock *sk field points to the network representation in the kernel. We’ll see it later.

This is a minimal network layer representation of sockets, holding socket information such as src/dst addresses, and is a subset of the struct sock that will be introduced in the next:

struct sock sk is the first field in this struct, followed by some INET related fields:

Similar as previous, this struct wraps over struct inet_sock,

The comments say, accept queue is “FIFO of established children”, but this is not accurate enough: with TFO enabled for the server side (default disabled), all incomplete connections (SYN_RECV state) will also be inserted into the accept queue.

This finishes our journey of socket related data structures, now take a look again and have a good memory in mind before we dive into the code:

Now let’s see what happens when a listen() system call is issued.

Note that these two parameters are all type int, which indicates that listen() system call is rather high level & general interface, which doesn't distinguish protocol families (INET, UNIX, etc) and protocol types (TCP, UDP, etc). In the remaining of this post, we’ll focus on INET TCP over IPv4 sockets.

The implementation of listen() system call is __sys_listen(),

Now let’s go to the implementation of INET socket listen().

The handler for this socket type is inet_listen()。

If BPF_SOCK_OPS_TCP_LISTEN_CB type BPF programs are attached in the right place, those programs will be executed, in which way you can customize some TCP listen behaviors without modifying and re-compiling the kernel code.

Refer to our previous post [2] for such as a similar example (customizing TCP RTO).

With all the above steps succeed, the listening socket will be ready for serving client connection requests (through 3WHS).

So, in the next let’s dig into the 3WHS process in the server’s perspective, especially where are the “SYN queue” and accept queue and how they work collaboratively.

tcp_rcv_state_process() implements the receiving procedure for all states except ESTABLISHED and TIME_WAIT,

A kernel memory area will be reserved, and when request socket objects are allocated later, the object size will be sizeof(struct tcp_request_sock).

On receiving a connection request:

Note that there are two types of listen errors:

SYN flood attack works by sending lots of SYNs to a server, the server will allocate a request_sock object for each connection request, occupying lots of kernel memory. The cost is just one SYN packet for the client (no memory allocation).

Note that the real object type is struct tcp_request_sock, but it returns the general struct request_sock pointer, and the latter is added to the accept queue.

Note that "SYN queue" is not a real queue like the accept queue, but only a counter plus a shared hash table ehash:

The last step is to send a SYN+ACK to the client:

If SYN+ACK is lost, the server is responsible to retransmit it:

Again, start from the tcp_rcv_state_process(), but this time from a different code block:

Note that the two parameters passed in: req_unhash and req, they are actually the same object, aka the request_sock,

Witht 3WHS succeeds, the connection will be in ESTABLISHED state and in the accept queue, waiting for the listening application to dequeue it by accept() system call.

This sets an end to our kenrel adventure. In the next we’ll back to human world.

6 A tale of two queues

Some snippets from the NOTE part:

Now let’s compare the two queue in many aspects.

“SYN queue” is not a real queue, but combines two pieces of information to serve as a queue:

sk_ack_backlog in struct sock of the listening socket holds the number of connections in the accept queue.

Why this design? According to [4]:

The short answer is that SYN queues are dangerous. The reason is that by sending a single packet (SYN), the sender can get the receiver to commit resources (memory for the SYN queue entry). if you send enough such packets fast enough, possibly with a forged origination address, you will either cause the receiver to exhaust its memory resources or to start refusing to accept legitimate connections.

For this reasons modern operating systems do not have a SYN queue. Instead, they will various techniques (the most common is called SYN cookies) that will allow them to only have a queue for connections that have already answered the initial SYN ACK packet, and thus proved they have dedicated resources themselves for this connection.

The ehash is where all the ESTABLISHED and TIMEWAIT sockets have been stored, and, more recently, where the SYN “queue” is stored.

The code for checking whether “SYN queue” is full:

But the actual “SYN queue” size seems to be calculated with three parameters:

No direct system metrics, but we can indirectly get the status by counting the number of sockets in SYN_RECV state for a listening socket:

SYN cookies can be used to alleviate the attack:

Also named complete queue, stores established connections that waiting to be dequeued by the application with accept() system call.

This is a real queue - a FIFO queue to be specific.

The smaller one of the following two settings wins:

Meanings of the Recv-Q/Send-Q columns: depending on the socket states, the meanings can be different,

Code that collects those metrics:

In computer networking, TCP Fast Open (TFO) is an extension to speed up the opening of successive Transmission Control Protocol (TCP) connections between two endpoints. It works by using a TFO cookie (a TCP option), which is a cryptographic cookie stored on the client and set upon the initial connection with the server.[1] When the client later reconnects, it sends the initial SYN packet along with the TFO cookie data to authenticate itself. If successful, the server may start sending data to the client even before the reception of the final ACK packet of the three-way handshake, thus skipping a round-trip delay and lowering the latency in the start of data transmission.

Note that this is not a bool option, but int: