An internal user reported that they noticed some of their instances (docker containers) periodically get a relatively large sceptical ingress traffic - even if their instance is not serving, shown as below:

The data center network utilizes a Spine-Leaf architecture, with Leaf nodes serve as both distributed L2 and L3 gateway.

While inside each compute host, all instances connected to a OVS bridge, and the default route inside container points to its own (distributed) gateway. 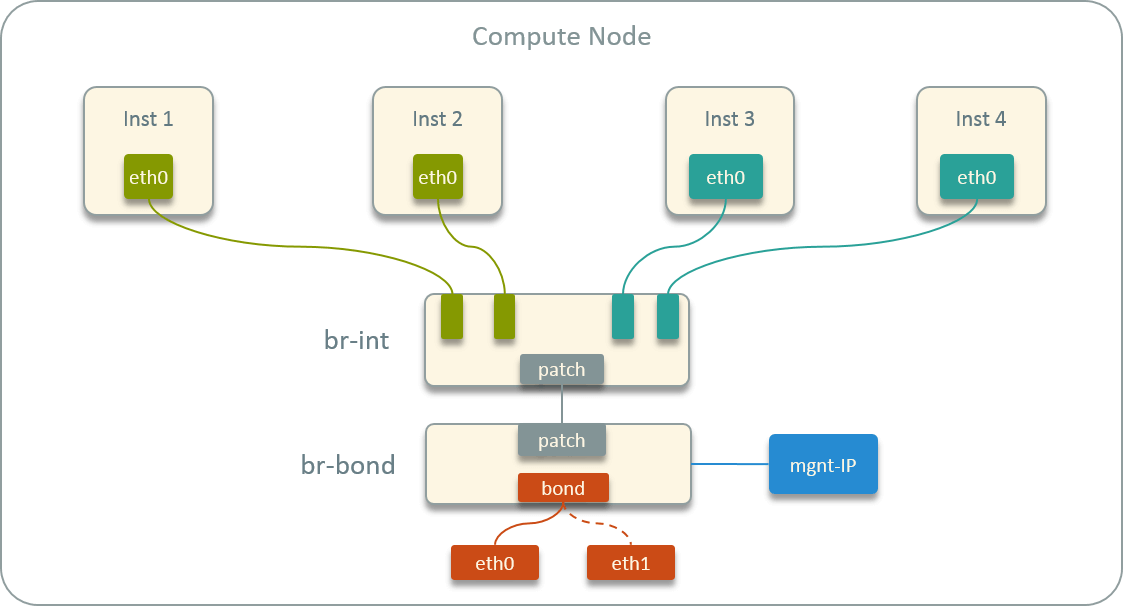 Invoke tcpdump and without too much effort, we confirmed that these traffic are not targeted for the container, namely, neither the dst_ip nor the dst_mac of these periodical packets were the intances’s IP/MAC. So we got the first conclusion: OVS was doing unicast flooding [1].

Unicast flooding means, OVS didn’t know where the dst_mac of a packet is, so it duplicated this packet, and sent a copy of this packet to all the interfaces that having the same VLAN tag. E.g., in Fig 2.2, inst1’s egress traffic will be duplicated to inst2, but not inst3 and inst4.

3.2 Confirm: all flooded traffic are destinated for the L2 GW

Then next the question was, why OVS didn’t know the dst_mac.

But further looking into the captured packets, we found that all these flooded packets sharing the same dst_mac, let’s say 00:11:22:33:44:55. It took we a while to figure out that this was the distributed L2 gateway address in our Spine-Leaf network (this MAC was manually coded, responsible by another team, that’s why we didn’t determined it at first time).

Next, we’d like to verify our assumption: L2 GW’s entry in OVS fdb would be stale when this problem happened.

Fortunately, the problem happened every 20 minutes (turned out there are some periodic jobs that generated the traffic), so it’s easy for us to capture anything we wanted. We used following command to check the entry’s existence. In our case, the instance has a VLAN tag 4, so we grep pattern " 4 00:11:22:33:44:55".

During the test, we found that the print disappeared for minutes, and this period exactly matched the problematic period. So the second conclusion: the fdb entry indeeded went to stale ahead of the ARP entry inside container (as container was using this ARP entry transmitting those packets).

But there was still one question remaining: container’s traffic was not interrupted when during flooding, which meaned, the packets from gateway to container had succesfully been received by container, so from container’s view, it was not affected by this flooding behavior (but if the flooded traffic was really huge, the container may be affected, as there may have packet drops at this case).

In short: gateway had replied every request it received from container, why OVS hadn’t flushed its fdb entry for gateway? In theory OVS would do so, as the replies were unicast packets originated from gateway. Did we miss something?

Cloud it be possible that the src_mac of unicast reply from gateway is different from the GW_MAC seen in container?

To verify, I invoked a really simple traffic, ping GW from container, print the src and dst MAC addresses of each packet:

This was the behavior of Cisco devices, we further checked our H3C devices, surprizingly found that under the same conditions, H3C replies were consistent: it always uses 00:11:22:33:44:55 for both sending and receiving. Till now, I havn’t got a definitive answer about what a distributed L2 (and L3) should behave.

If there are no frames originated from this ARP for 19 minutes, it will send a gratuitous ARP to this IP (host).

This problem was raised by the distributed L2 GW behavior, but actually it is a configuration error inside host: we should always make sure intermediate forwarding devices (OVS bridges in our case) have a longer aging time than instance itself, and physical switch ARP aging time.

Linux kernel’s ARP aging machanism is really complicated, rather than one or several parameters, it is controlled by a combination of parameters and a state machine, refer to this post [3] if you are interested. Set OVS fdb aging to 1800s is safe enough for us:

After this configuration, the problem disappeared:

The kernel usually has a longer ARP aging time than OVS fdb (default 300s), thus in some cases, when the gateway’s MAC entry is still valid in ARP table, it is already stale in OVS fdb. So the next egress packet (with dst_mac=GW_MAC) to the gateway will trigger OVS unicast flooding.

When received a correctly responded packet from gateway, OVS fdb will flush gateway’s MAC entry, then subsequent unicast flooding will stop (turned to normal L2 forwarding as OVS knowns where GW_MAC is).

The real catastrophe comes when gateway responded incorrectly, to be specific:

In this case, the OVS fdb will not be flushed, so OVS will unicast-flood every egress packet of the container which are destinated for the gateway, until the gateway proactively advertises its virtual MAC to container, or container initiates a proactive ARP request to gateway - this flooding period may persist for minutes, and all traffic in the same VLAN (or even in the entire OVS if VLAN not used) will be accumulated/copied to every instance that connected to OVS.

This may cause severe problems (e.g. packet drop) if you have QoS settings for the OVS interfaces that containers are using.