This post makes an exploration into OVS internal port. 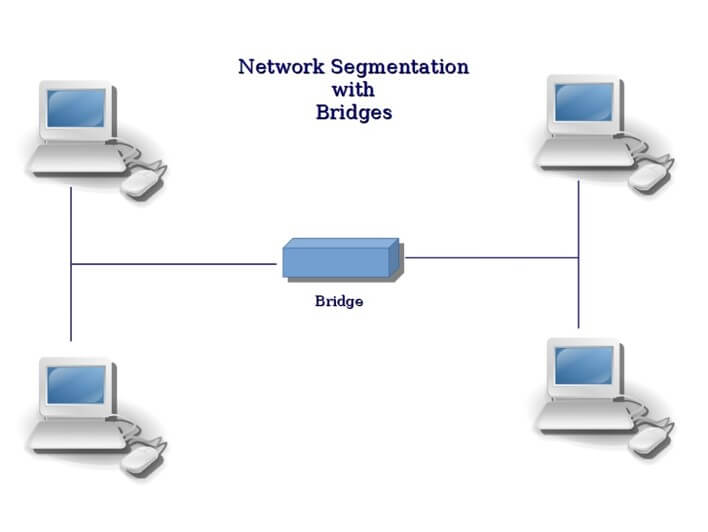 Fig.1.1 Hosts connected by a bridge

From the forwarding process we could see, a hypothetical bridge works entirely in L2. But in real environments, a bridge is always configured with an IP address. This seems a paradox: why we configure a L2 device with an IP address?

The reason is that for real a bridge, it must provide some remote management abilities to be practically useful. So there must be an access port that we could control the bridge (e.g. restart) remotely.

Access ports are IP based, so it is L3 ports. This is is different from other ports which just work in L2 for traffic forwarding - for the latter no IPs are configured on them, they are L2 ports.

Linux bridge is a software bridge, it implements a subset of the ANSI/IEEE 802.1d standard. It manages both physical NICs on the host, as well as virutal devices, e.g. tap devices.

Physical port managed by Linux bridge are all dataplane ports (L2 ports), they just forward packets inside the bridge. We’ve mentioned that L2 ports do not have IPs configured on them.

So a problem occurs when all the physical ports are added to the linux bridge: the host loses connection!

To keep the host reachable, there are two solutions:

Then, some triky things come.

We will verify this later. Now let’s continue to OVS - a more powerful software bridge.

OVS is more powerful bridge than linux bridge, but since it is still a L2 bridge, some general bridge conventions it has to conform to.

Among those basic rules, one is that it should provide the ability to hold an IP for an OVS bridge: to be more clear, it should provide a similar functionality as Linux bridge’s virtual accessing port does. With this functionality, even if all physical port are added to OVS bridge, the host could still be accessible from outside (as we discussed in secion 2, without this, the host will lose connection).

OVS internal port is just for this purpose.

When creating an internal port on OVS bridge, an IP could be configured on it, and the host is accessible by this IP address. Ordinary OVS users should not worry about the implementation details, they just need to know that internal ports act similar as linux tap devices.

Create an internal port vlan1000 on bridge br0, and configure and IP on it:

We have hostA, and the OVS bridge on hostA looks like this:

Two physical ports eth0 and eth1 is added to the bridge (bond), two internal ports br-bond (the default one of this bridge, not used) and vlan1000 (we created it). We make vlan1000 as the accessing port of this host by configuring an IP address on it:

ping hostA from another host hostB (with IP 10.32.4.123), capture the packets on hostA and show the MAC address of L2 frames:

We could see that the source MAC (a6:f2:f7:d0:1d:e6) of ICMP echo reply packets is just the vlan1000’s address, not eth0 or eth1’s - although the packets will be sent out from either eth0, or eth1. What this implies is that, from the outside view, hostA is seen to have only one interface with MAC address a6:f2:f7:d0:1d:e6, and no matter how many physical ports are on hostA, as long as they are managed by the OVS (or linux bridge), these physical ports will never be seen from the outside.

Fig.2.3 Outside L2/L3 View of Bridge Managed Host: Only L3 ports could be seen

In the underlying, the internal port is implemented through tap interface.

You could create multiple internal ports on one OVS bridge, and more importantly, since internal port is L3-accessible from outside and socket-based (thus kernel stack based), it could be used as virtual NIC, for VM or containers.

As containers have their own network namespaces, we could not connect container to OVS directly, the latter works in the default namespace. The typical way to solve this is to create a veth pair: move one end to container, and the other end attached to OVS. 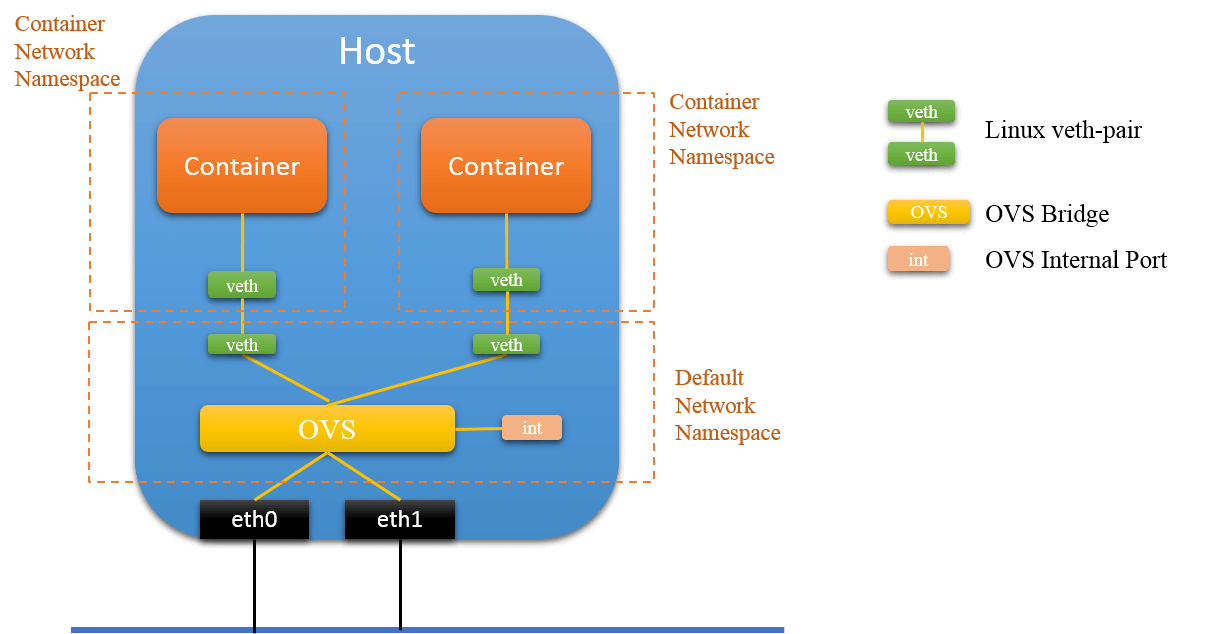 This is simple and straitforward in concept, but will suffer from performance issues. Could container be connected to OVS directly? The answer is yes! We will use internal port to accomplish this. 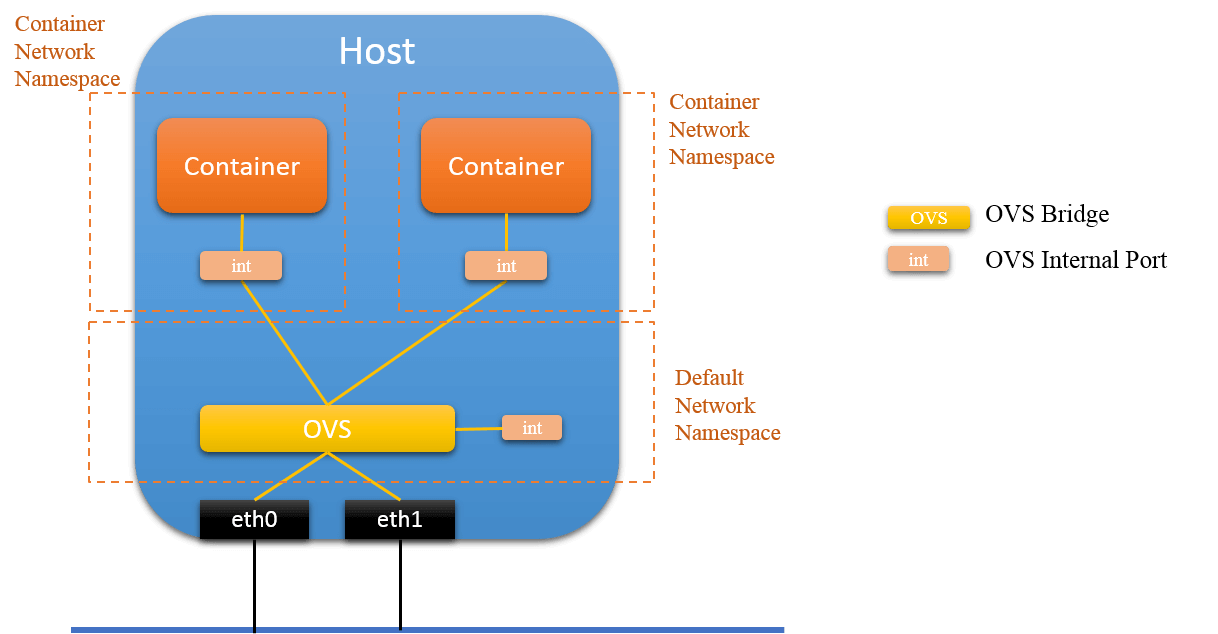 The main steps are as follows:

I encapsulated the above procedures into scripts, here is the steps with this scripts:

UPDATE (2020.03): explicitly exposing container netns is cumbersome, instead, you could achieve the same effect as step 4 & 5 with tool nsenter, see my later post Cilium Network Topology and Traffic Path on AWS for an example.

Connect to OVS via internal port achieves (slightly?) better performance than via veth-pair.