Note: this post also provides a Chinese version, but may update less timely as this one.

This post talks about connection tracking (conntrack, CT), and the design and implementation inside Linux kernel.

Code analysis bases on 4.19. For illustration purposes, only the core logics are preserved in all pasted code. We have attched the source file names in kernel source tree for each code piece, refer to them if you need it.

Note that I’m not a kernel developer, so there may be some mistakes in this post. Glad if anyone corrects me. 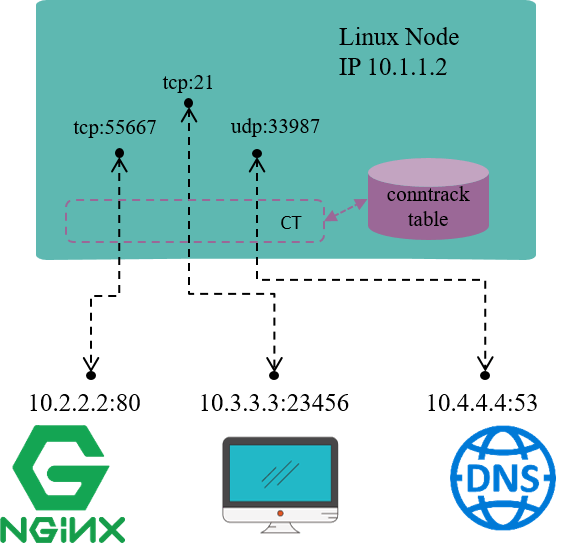 Connection tracking, as the name illustrates itself, tracks (and maintains) connections’ states.

Conntrack module’s responsibility is to discover and record these connections and their statuses, which include:

But note that, the term “connection” in “connection tracking” is different from the “connection” concept that we mean in TCP/IP stack. Put it simply,

When refering to the term “connection”, we mean the latter one in most cases, namely, the “connection” in “connection tracking” context. 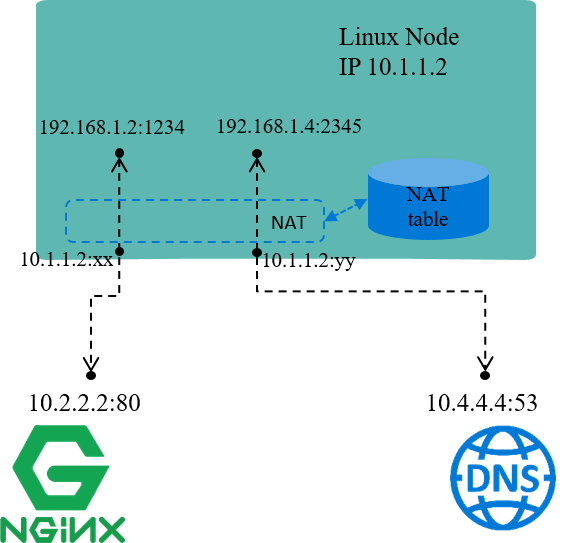 So, one of a solution for this scenario is:

This is the underlying working mechanism of NAT.

NAT may replace the source ports as well. It’s easy to understand: each IP address can use the full port range (e.g. 1~65535). So assume we have two connections:

if NAT only replaces source IP addresses to node IP, the above two distinct connections after NAT will be:

which mixed into a same connection that could not be distinguished and the reverse translation will fail. So NAT also replaces source ports if collision happens.

NAT can be further categorized as:

Our above examples falls into SNAT case.

If L4LB uses NAT mode (between VIP and Real IPs), then L4LB will perform full NAT between client-server traffic, the data flow depicted as Fig 1.3.

With the above concepts in mind, let’s reasons about the underlying theory of connction tracking.

To track the states of all connections on a node, we need to,

Besides the above functional requirements, performance requirements also need to concern, as conntrack module needs filter and analyze every single packet. Performance considerations are fairly important, but it is beyond the scope of this post. We will refer to performance issues again when walking through the kernel conntrack implementation later.

Further, it’s better to have some management tools for faciliating the using of conntrack module. 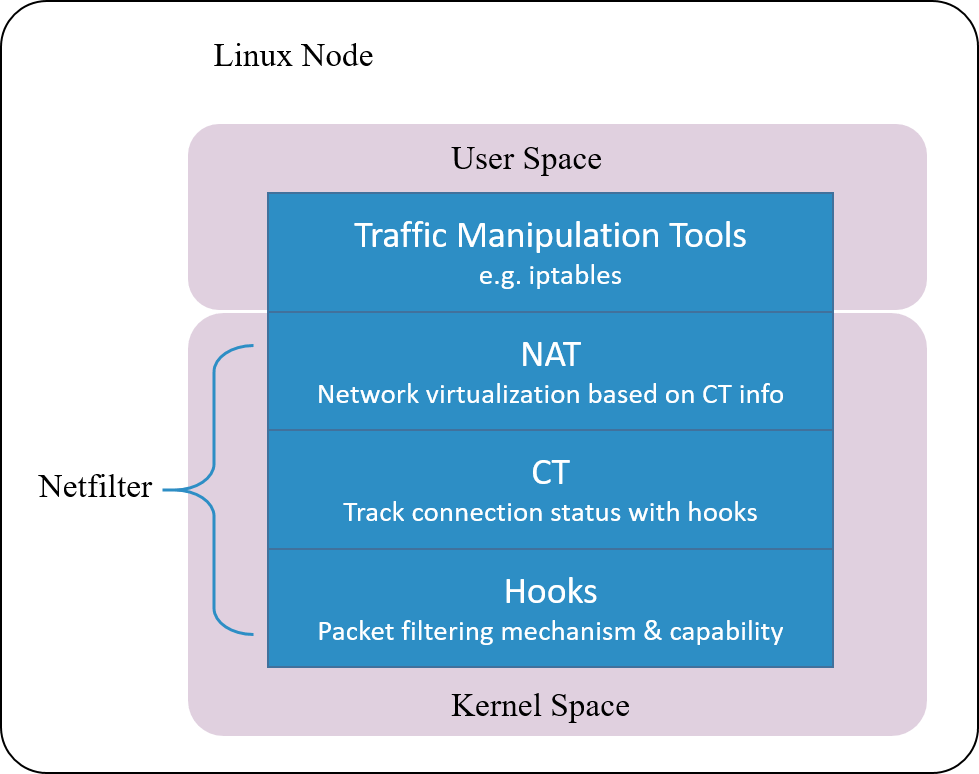 Linux’s connction tracking is implemented as a module in Netfilter framework.

Netfilter is a packet manipulating and filtering framework inside Linux kernel. It provides several hooking positions inside kernel, so packet hooking, filtering and many other processings could be done.

Put it more clearly, hook is a mechanism that places several checking points in the travesal path of packets. When a packet arrives a hooking point, it first get checked, the checking result could be one of:

Note that conntrack module only extracts connection information and maintains its database, it does not modify or drop a packet. Modification and dropping are done by other modules, e.g. NAT.

Netfilter is one of the earliest networking frameworks inside Linux kernel, it initially got developed in 1998, and merged into 2.4.x kernel mainline in 2000.

After more than 20 years evolvement, it gets so complicated that could result to degraded performance in certain scenarios, we will talk a little more about this later.

In other words, as long as we have the hooking capability - the ability to hook every single packet that goes through the system - we could implement our own connection trakcing mechanism. 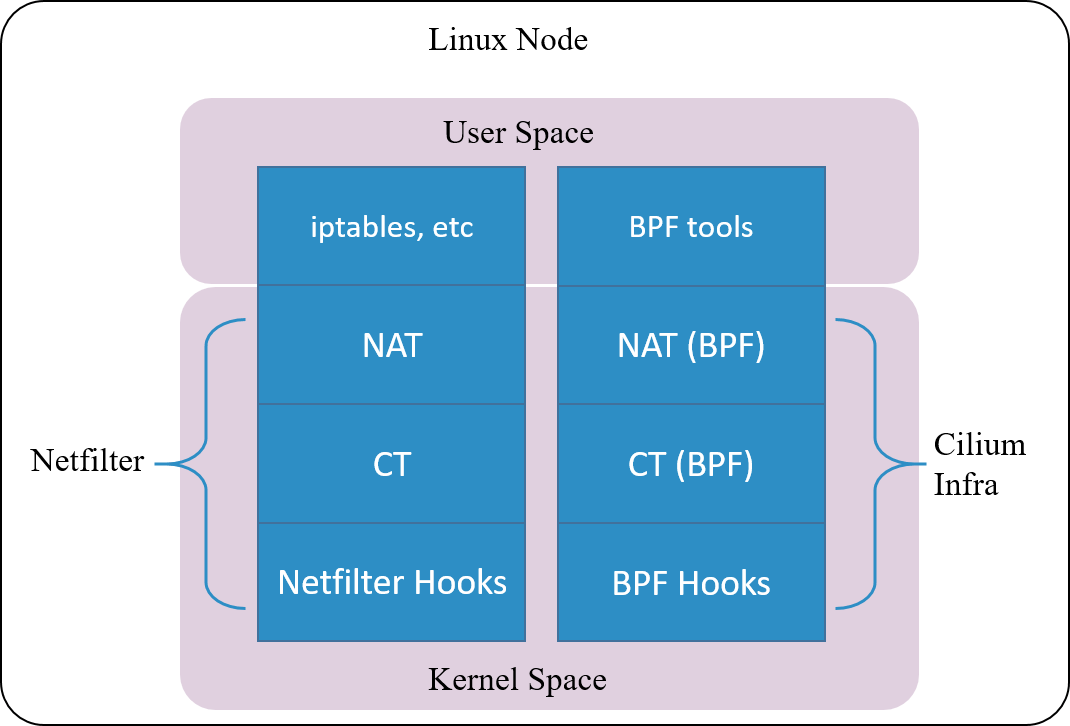 Cilium, a cloud native networking solution for Kubernetes, implements such a conntrack and NAT mechanism. The underlyings of the impelentation:

So, you could even remove the entire Netfilter module , and Cilium will still work properly for Kubernetes functionalities such as ClusterIP, NodePort, ExternalIPs and LoadBalancer [2].

As this connction tracking mechanism is independent from Netfilter, its conntrack and NAT entries are not stored in system’s (namely, Netfilter’s) conntrack table and NAT table. So frequently used network tools conntrack/netstats/ss/lsof could not list them, you must use Cilium’s commands, e.g:

Also, the configurations are also independent, you need to specify Cilium’s configuration parameters, such as command line argument --bpf-ct-tcp-max.

We say that conntrack module is independent from NAT module, but for performance considerations, their code may have certain couplings. For example, when performing GC for conntrack table, it will efficiently remove related entries in NAT table, rather than maintaining a separate GC loop for NAT table.

This ends our discussion on the theory of connection tracking, and in the following, we will dig into the kernel implementation.

As shown in the above picture, Netfilter provides 5 hooking points in the packet travesing path inside Linux kernel:

Users could register callback functions (handlers) at these points. When a packet arrives at the hook point, it will triger the related handlers being called.

There is another definition for these NF_INET_* variables, in include/uapi/linux/netfilter.h. These two definitions are equivalent, from the comments in the code, NF_IP_* are probably used for backward compatibility.

hook handlers return a verdict result after checking against a given packet, and this verdict will guide next processings on this packet. Possible verdict results include:

Multiple handlers could be registered to the same hooking point.

When register a handler, a priority parameter must be provided. So that when a packet arrives at this point, the system could call these handlers in order with their priorities.

iptables is the userspace tool for configuring Netfilter hooking capabilities. To faciliate management, it splits rules into several tables by functionalities:

This is not the focus of this post, more information on this, refer to A Deep Dive into iptables and Netfilter Architecture.

conntrack module traces the connection status of trackable protocols [1]. That is, connection tracking targets at specific protocols, not all protocols. We will see later what protocols it supports.

Tuple is one of the most important concepts in connection tracking.

A tuple uniquely defines a unidirectional flow, this is clearly explained in kernel code comments:

A tuple is a structure containing the information to uniquely identify a connection. ie. if two packets have the same tuple, they are in the same connection; if not, they are not.

In the following code, _man is short for manipulatable, which is a bad naming/abbreviating from today’s point of view.

There are only 2 fields (src and dst) inside struct nf_conntrack_tuple {}, each stores source and destination address information.

But src and dst are themselves also structs, storing protocol specific data. Take IPv4 UDP as example, information of the 5-tuple stores in the following fields:

From the above code, we could see that only 6 protocols support connection tracking currently: TCP, UDP, ICMP, DCCP, SCTP, GRE.

Pay attention to the ICMP protocol. People may think that connction tracking is done by hashing over L3+L4 headers of packets, while ICMP is a L3 protocol, so it could not be conntrack-ed. But actually it could be, from the above code, we see that the type and code fields in ICMP header are used for defining a tuple and performing subsequent hashing.

Protocols that support connection tracking need to implement the methods defined in struct nf_conntrack_l4proto {}, for example pkt_to_tuple(), which extracts tuple information from given packet’s L3/L4 header.

Pay attention to the calculating logic, and how source and destination address fields are used for the final hash value.

Each flow in Netfilter is called a connection, even for those connectionless protocols (e.g. UDP). A connection is defined as struct nf_conn {}, with important fields as follows:

All possible status of a connection, enum ip_conntrack_status： 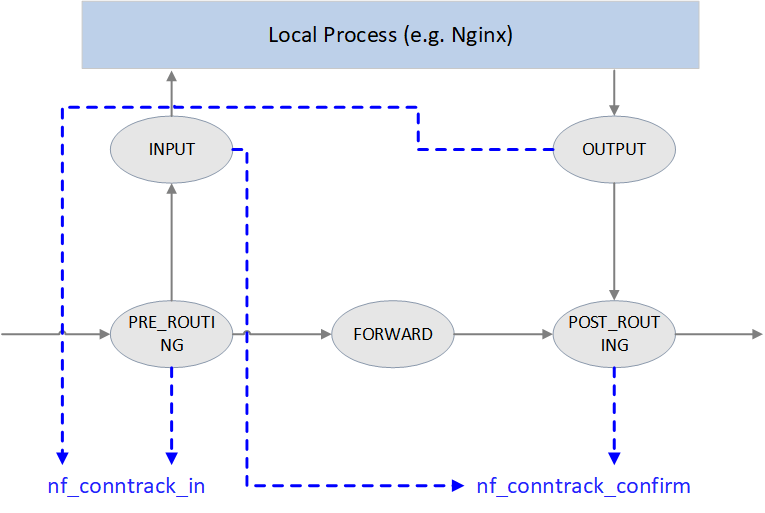 We could see how these handlers get registered into the netfilter framwork:

Method nf_conntrack_in() is the core of connection tracking module.

If connection does not exist yet (the first packet of a flow), resolve_normal_ct() method will call init_conntrack(), and the latter will further call protocol-specific method new() to create a new conntrack entry.

The new conntrack entry that nf_conntrack_in() creates will be inserted into an unconfirmed connection list.

If this packet is not dropped during intermediate processing, then when it arrives POST_ROUTING hook, it will be further processed by nf_conntrack_confirm() method. We have analyzed why it is further processed here instead of other hooking points.

After nf_conntrack_confirm() is done, status of the connection will turn to IPS_CONFIRMED, and the conntrack will be move from unconfirmed list to confirmed list.

Why bother to split the conntrack creating process into two stages (new and confirm)?

It is because after the initial packet passes nf_conntrack_in(), but before it arrives nf_conntrack_confirm(), it is possible that the packet get dropped by the kernel somewhere in the middle. This may result in large half-connected conntrack entries, and it would be a big concern in terms of both performance and security. Spliting into two steps will significantly accelerate the GC process.

One thing needs to be noted here: we could see softirq (soft interrupts) is disabled/re-enabled at many places; besides, there are lots of lock/unlock operations (omitted in the above code). This may be the main reasons of degraded performance in certain scenarios (e.g. massive concurrent short-time connections)?

NAT is a function module built upon conntrack module, it relies on connection tracking’s results to work properly.

Again, not all protocols supports NAT.

Protocols that support NAT needs to implement the methods defined in:

manip is the abbraviation of manipulate in the code:

Implementations of these methods, see net/netfilter/nf_nat_proto_*.c. For example, the TCP’s implementation:

nf_nat_inet_fn() will be called in following hooking points:

conntrack has a higher priority than NAT, since NAT relies on the results of connection tracking.

It first queries conntrack info for this packet, if conntrack info not exists, it means this connection could not be tracked, then we could never perform NAT for it. So just exit NAT in this case.

If conntrack info exists, and the connection is in IP_CT_RELATED or IP_CT_RELATED_REPLY or IP_CT_NEW states, then get all NAT rules.

If found, execute nf_nat_packet() method, it will further call protocol-specific manip_pkt method to modify the packet. If failed, the packet will be dropped.

Masquerade differentiates itself from SNAT in that when device’s IP address changes, the rules still valid. It could be seen as dynamic SNAT (dynamically adapting to the source IP changes in SNAT rules).

The drawback of masquerade is that it has degraded performance compared with SNAT, and this is easy to understand.

Connection tracking (conntrack) is a fairly fundamental and important network module, but it goes into normal developer or system maintainer’s eyes only when they are stucked in some specific network troubles.

For example, in highly concurrent connection conditions, L4LB node will receive large amounts of short-lived requestions/connections, which may breakout the conntrack table. Phenomenons in this case:

The reasons here maybe that conntrack table size is not big enough, or GC interval is too large, or even there are bugs in conntrack GC.